My personal feeling is that the more DIGG you release (and the faster it releases), the more likely you are to diverge from the BTC target and dip into negative rebase territory. Which is not necessarily a bad thing except that if the supply added to the circulation (i.e. your emissions) don’t also slow to match, you’re going to end up with an interesting combo of dropping spot price, negative rebase cycle, and increasing supply at the same time. To me, this feels like a recipe for continuous dumping to maintain profit-taking expectations, which isn’t very conducive to maintaining the target spot price range. The spot price of BTC is limited by the rate that miners can introduce more BTC into circulation, but that’s not true of DIGG.

The spot price of BTC is limited by the rate that miners can introduce more BTC into circulation, but that’s not true of DIGG.

That is an interesting point. What if the rate matched BTC mining? I guess that isn’t possible either given that miners can hold and release whenever they want.

True, but perhaps a time-weighted average of miner selling into the market would suffice to roughly track the rate that BTC enters the market? Or something tied to the amount of BTC mined per block instead since that would be more easily trackable and calculatable? I don’t think you’re going to be able to get an exact match on the rate of BTC entry into circulation either way, but since DIGG isn’t a 1:1 peg either, that would probably suffice.

with many people talking about $badger price decreasing over the past couple days, @bberry259 brings up an interesting thought:

$digg staking only earning $digg and no $badger. this could incentivize people to sell at least a portion of their $digg airdrop/possibly $digg yield to purchase some $badger for better farming yield

Firstly, big thank you to @Mr_Po for the detailed models so far.

I’ve been reading the forums and discussions from the past few days and the objectives for DIGG seem to be pretty clear. (BIP 3: DIGG Sett Staking Rewards Improvement)

With that being said I still feel there’s no consensus about the actual emissions of DIGG during week 1. Many seem to prefer an emissions model that benefits Badger and DIGG LPs + Stakers while ensuring the highest likelihood of maintaining the BTC peg.

I’d like to propose this model that I feel achieves both objectives. This is an approximate model and based on the total emission numbers used by @Mr_Po. 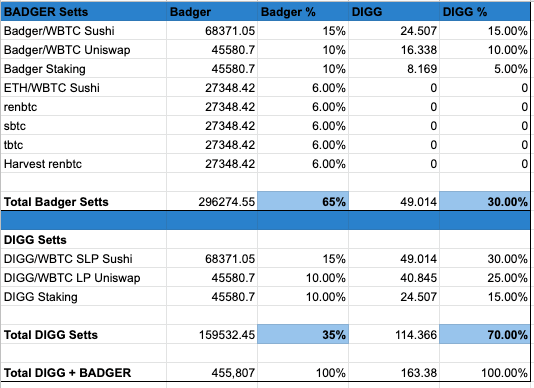 I think btc sett holders should get some digg. Most of our TVL is in bitcoin holders, isn’t the idea is to get them to hold digg. I’d take like 10% from across the other areas and put 2% digg in each btc pool.

TBH I see majority of btc sett holders dumping the Badger and Digg they receive, which will only lead to negative sell pressure.

Obviously, more TVL is good for Badger and DIGG, but I think this a chicken and egg problem, and that the extra DIGG rewards won’t bring in considerable amount of capital to justify the 10%.

That being said, 2% per BTC sett can definitely be adjusted from the DIGG Sets if the community thinks it’s a good option, would love to hear thoughts on this!

Interesting. Where do you see that? Any evidence to support the claim? I’ve been in two of the BTC sets since the first set and haven’t sold a single Badger and I can’t imagine I’m alone in that. The yield has been compelling on both it and the Badger.

I would be wary about anything that doesn’t have a mind to incentivise TVL being maintained on the platform, particularly given that utility of wBTC is increasing as market value goes up (collateral) and Yearn V2 with their huge curve weighting will likely be very attractive. TVL drives the entire performance fee model and I think allocating some Digg as well as Badger will give folks another reason to stay involved. We want to be the preeminent BTC defi platform and I think competition will be fierce Q1 CY21.

I also don’t see the need to incentivise so many liquidity pools with the same token pairing as well. Particularly with Sushi already providing incentives of their own on the Sushi LP pair.

Thanks everyone for their contributions to the chat so far.

We want to be the preeminent BTC defi platform and I think competition will be fierce Q1 CY21.

Well said! This needs to be said more

this was an awesome idea! I actually ended up writing a tutorial for this https://badgerin.medium.com/how-to-use-zapper-fi-to-invest-in-badgers-sushi-pools-3-simple-steps-ebf8cb38361a

giving a heads up for ballpark gas cost during each step is super nice! love the article! @badgerin

the goal of creating the narrative around using multiple different products is to help users possibly claim some of the retroactive airdrops that may happen for some of these services in the future (DEX.AG, dydx, Matcha, Zapper etc.)

this is important to note and understand. we want our badgers to be active users of ethereum. a lot of new metamask users will be coming to our dao in the next few months