I think you misunderstood me completely, to be honest. Why reduce from the Setts instead? It is all about achieving the right balance. That’s all. And I believe Badger holders should also be staking Badger AND using the rest of the products (Setts) - this is a win-win.

I barely mentioned Digg and I am not making it more important. On the contrary, I am against Digg getting too much Badger, exactly because of what you say. We are in agreement there.

Here’s an option to consider: 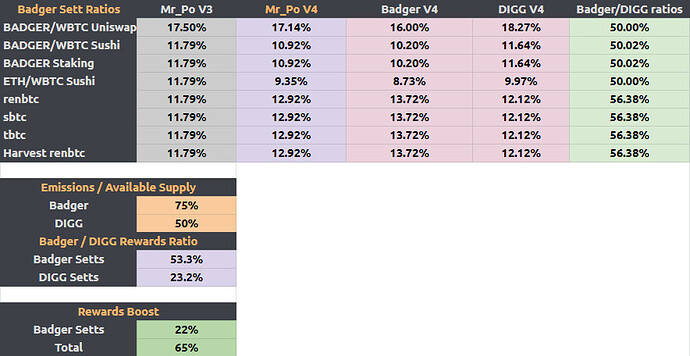 I agree that BTC-only Setts shouldn’t be underincentivized comparatively.
So I’ve tried to normalize the overall increase in rewards for all Setts.

I’m not sure if a further decrease in Badger emissions for DIGG Setts would gain us much.
Since V3, DIGG Setts get only 13.29% of Badger emissions (it was 25% in V1/V2). And the Badger/DIGG ratio of DIGG Setts rewards is not high: it’s 23% already - and would get to 20% if Badger price would drop to 5.5.

I start to have some reservations about changing the Badger/DIGG ratios and how it might play out in reality. I get those from seeing how the model reacts to price changes.
I can imagine some realistic and unpleasant spiral effects that could come from that adjustment.

I’m leaning towards thinking that the safest play would be to go with 50/50 Badger/DIGG rewards for all Setts - at least for the first week, when we can expect a lot of volatility on both Badger and DIGG.

A lot of the numbers in sheets got quite fragile compared to V1/V2 models.
My main objective was to normalize the expected APYs for Badger and DIGG Setts.
It is a much more stable and controllable construct when the APYs come 50/50 from Badger/DIGG emissions.

I’ll dig into that a bit deeper and come back with V5.

Meanwhile, I have a question to ask.

What do you think is the correct reward ratio of WBTC/ETH Sushi Sett compared to Curve BTC only Setts?

Thanks for this @Mr_Po. Just to confirm. Those numbers are based on those informations ?

Yes, those numbers are based on the numbers you’ve mentioned. They are used as total available emissions.

Using 75% of available Badger emissions and 50% of available DIGG emissions for week 4 of BadgerDAO incentives allows extending the liquidity mining program beyond 8 weeks while still providing a considerable boost to the total amount of value distributed.

Last time I checked, the overall estimated value BadgerDAO Sett users would get with this emission model is 65% higher than week 3.

Fair . Badger must stay the king

Digg has a simple to understand value proposition (algorithmic synthetic BTC). So one digg should be worth 1 btc.

DIGG is as volatile of a ‘currency’ as Badger. 1 DIGG is targeted to be worth 1 BTC, but it doesn’t mean that you will keep owning 1 DIGG.

DIGG value proposition is at targeting BTC price, that is correct. But what if it fails to do so?
Having DIGG value backed by Badger value is a good thing for DIGG.
At least for the early stage, when its value is not set in stone and we have not rolled out more advanced price stabilizing methods.

Having a rebasing token that exists on its own overall is an inferior model to the model where rebasing token is backed by another value-producing asset.

What I’m saying here is I will continue to mine Badger as I’m getting DIGG (and I really want digg as that’s very valuable). But if I could get DIGG and Badger by mining DIGG I’ll do that instead.

If you could get 600% APY for mining Badger and 400% for mining DIGG would you still mine DIGG to get the rewards?

It is less of a structural question and more of a balancing act, in my opinion.
And the most reliable way to balance is by having 50/50 Badger/DIGG rewards ratios.

Otherwise if Badger’s price decreases, people will have a financial incentive to exchange it for DIGG to mine DIGG Setts for better APYs, thus decreasing the Badger’s price even further.

Following the logic you’ve presented above, if people think that 1 DIGG is 1 Bitcoin (and more), and Badger is a token with no real value, why would they prefer to mine the Badger Setts over DIGG Setts?

Continuing my previous thoughts from before, there is an easy way to solve for the difference in the APYs - the 50/50 split in ratios.
An alternative way would be to further cut the emissions of DIGG.

This is my favourite version for sure.

I think the WBTC/ETH sett should be aligned with CRV BTC emissions and potentially will be our biggest vault in terms of TVL. On top of the Badger and DIGG they earn they will also receive optimized SUSHI as we stake for xSUSHI and distribute back to them.

Also, the Sushi wbtc/badger pool should probably be in line with UNI LP. I’d maybe split the difference (50k) in each. Potentially reduce Badger only slightly as well to incentivize LP’ing over just staking.

Other thing I’d say and we are seeing it in week 3 is there should be a clear APY % different between DIGG only vs DIGG/WBTC LP pairs. This week was the first week we saw Badger only and Badger/wbtc LP APY become relatively close (200% difference). With the rapid rise in BTC price we noticed quite a few large depositors take their LP position out to stay exposed to BTC without IL and then just stake the Badger in Badger only vault. Makes sense right? Why take the IL risks.

With that we should have the DIGG LP distribute more Badger and DIGG vs DIGG only.

I’ve been working on the Dynamic Emissions Model (DEMo) for Badger/DIGG Emissions.

In short, this model allows for easy normalization of distributed value over time with double token emissions.
It’s still an alpha version, so something could be wrong

But the idea is that by using it, you can instantly assess the costs and the benefits of changing different inputs.
And have a token emission schedule as a result.

So feel free to ask to adjust whatever specific parameters you would like to take a look at, it should take much less time now.

The only difference is in Badger/DIGG rewards for Badger Setts. The first one rewards 58% Badger, but requires 80% of Badger emissions.

The second one, which I favor, has 50% Badger rewards - and this decreases the Badger issuance to 71%. Otherwise, they’re the same.

Regarding Sushi Badger/WBTC Pair.
My general approach was that no Setts should have reduced rewards for week 4.
Making Sushi LP on par with Uniswap LP would be costly to introduce in terms of emissions, so I’ve met you halfway in the current version.

The rewards for Sushi LPs might already be higher than on Uniswap with the same level of liquidity due to Sushi staking rewards.
And having much larger liquidity on Sushi than on Uniswap doesn’t make sense to me unless we start having a much bigger volume there.

I agree with the benefits of having the WBTC/ETH pair. Albeit I believe that the maximum value from this pair would be gained if we had two Setts - on Uniswap and on Sushi.
Both in terms of TVL and commissions earned.

At least judging from the last week, BadgerDAO would earn more money on commissions from Uniswap WBTC/ETH pool than from Sushi.

If anything, WBTC/ETH liquidity is currently more needed at Uniswap, so it also makes sense from the ecosystem development standpoint.

I completely don’t mind adjusting the staking rewards ratio. I had the same original thoughts, but also had some others

Great work again Po. I think we are pretty much there. I prefer the first 1.

Only thing I would change is reducing the amount of Badger for DIGG setts slighting. Maybe LPs to 21k,21k and DIGG only to 15k.

Only reason I suggest this for week 1 is that APY’s for DIGG setts are going to be through the roof. Attracting TVl pretty aggressively. It’s at times like this that we can conserve additional rewards for the future. Removing the extra BADGER from DIGG setts in my opinion would change nothing.

Also, this is a great framework and structure to start planning emission management strategy for remaining weeks of LM event.

Add on top of that a buy back program using our treasury, reduction in the need to incentivize liquidity do to that treasury acting as a liquidity source and managing distribution between DIGG/BADGER weekly .

Looks good! It actually brings us back to 76/52 rate of emissions:

Amazing work! Very excited about this !

There are a lot of great ideas, very good, I see a great future

This looks great, been pulled away on dad duty this week but checking in periodically. Thanks for such detailed analysis and breakdown.

Truly great work and the go-to for DIGG week 1

@mason brought up a really good topic to discuss that I’ve had my reservations about since before the Badger launch: the comparative underincentivization of liquidity locked in LP pools.

This matter might be especially important in the context of the DIGG launch.

The metric I suggest to consider adjusting is the reward per DIGG/Badger pooled within the program.

Here’s how distributions would look if we were to reward the same amount for Badger and DIGG per liquidity pooled:

As for reasons to introduce DIGG staking overall, @Spadaboom covered it well in a discussion on Discord:

The buying power of your DIGG changes not only with its price but also with the amount of DIGG you hold - and that amount changes due to rebases.

If you own 1 DIGG at the start of the month, it doesn’t mean that you will own the value of 1 BTC at the end of it.

DIGG is a volatile asset, but its volatility is more focused around its supply than around its price.

Great work here. I like the line of thinking. Something brought up in another thread that I’m considering this morning is that given the high yield on DIGG from outset, price of DIGG will probably rise above it’s peg as people buy to farm leading to expansionary rebase from outset.

In my mind this will lead to a number of outcomes, one is that LPs will sustain greater losses due to the mismatch of price in wBTC<>DIGG, not the worst consequence as it will lead to the wBTC share of the pool to increase, but certainly a liquidity consideration.

If DIGG setts return is too close to LP returns, I’d hypothesize that people will forego LPing to just provide DIGG, leading to higher demand and higher price for DIGG without the gains in liquidity we might want to see.

What I think would be interesting is to look at the time since launch and see if there is an “equilibrium” BADGER reward/LP ratio (hard to say “apy” with badger price changing).

So, roughly it would be like " people stop staking LP at roughly X badger per LP". We can then use that as a metric to set the emissions at a rate that would get us to a “target liquidity”. We dont think there is enough liquidity, we can set it higher that week, theres plenty, keep it the same or lower.