The goal of this post is to get feedback on proposed emission specifics for BADGER and DIGG once DIGG has launched.

Depending on DIGG launch relative to the BADGER “Week” cycle it may not play out EXACTLY like this in the first week. All adjustments to accommodate any gap will stick with the same relative distributions across setts.

I’m tired of Uniswap. I suggest we skip emissions for the digg/uni lp and tell people to use Matcha or 1inch to trade. We can always add uni in later if it creates problems.

i can’t be the only one …thinking… about going full digg/wbtc lp, just curious how this will affect $badger. buckle in haha hereeee weeee gooooooooooooo

Beautiful. Thanks for your work on this.

Following up on the Discord comments that the analysis shows the drop in APY in the BTC non-badger setts this proposes would be ill-advised and there is just too much Digg flooding into the Digg sets all at once. I propose we alter course and gradually ramp up Digg rewards release by starting week 1 at 60% of the proposed weekly emission level and use the surplus in subsequent weeks to tactically add to any sett we would like to increase rewards/APY and drive TVL all without taking from another pool. This should also continue to drive engagement as the APY will continue to increase each week until it levels off breaking the pattern of a constantly decreasing APY. This proposal assumea a $10 price for Badger and $22.8K for BTC. This will increase APY to all current setts and sets the bar high for the new ones. Tons of places for fresh badger, digg, wbtc, and eth capital to go looking for high APY!

The proposed emissions schedule below shows a reduction in the non badger setts, with hardly an increase for existing sett holders with a huge amount of capital flowing to Digg setts.

What about Badger - Digg LP Sett ? It would reduce sell pressure after Digg lunch.

it’s really nice to see the numbers like this and compare. thanks for putting this together!

in another thread, @Spadaboom mentioned it may not be a good idea to reduce emissions much for the $crv vaults due to 80% of badgerDAO value locked into those setts. i came over from yearn $sbtccrv vault - had originally deposited in yearn with the intention of degening in and out but had my lp tokens in yearn $sbtc vault sep-dec - from my perspective it could be good to continue to incentivize long term minded liquidity in badgerDAO wrapped btc $crv vaults. the users that are coming to defi and aren’t participating in forums yet will likely want a sett and forget, claim for the dopamine yield farm. stable and reliable capital allows us to continue to innovate.

at the same time, i stayed in yearn vault for less than 7% apy on avg so maybe reducing isn’t so big of a deal haha

From the first glance I like the total amount that is being deistrbuted to the present Setts.
We’re basically keeping around the same APYs for the current Setts, which is good in my opinion.

So instead of having large rewards initially and then cutting into them, we would be adding more rewards.

Another thing to consider is that as the Sett strategy is to always sell 25% of the rewards on the market to add to LP position, there is potential for it to be problematic.
In the scenario where we enter the negative rebase phase and keep automatically selling large staking rewards we release, pulling out of this might be difficult.

To sum up, the thing I propose conceptually is to have the peak of DIGG emissions for the liquidity mining program not in the first week, but when there are more DIGG Setts available.

I am also a fan of not distributing all the liquidity mining emissions (40% of the supply) in the first 8 weeks.

I propose the starting range of 33-50% of the proposed DIGG emissions.
My assessment is that the APYs still will be crazy high. And making the APYs too crazy high is not a very healthy thing for DIGG.

If we start with the same rewards for DIGG Setts as for the Badger Setts (78.13 DIGG weekly budget = 34% of the proposed rewards), we still are likely to end up with 500%+ APYs for DIGG Sett depositors.
I believe starting on the smaller side and ramping up is generally better.

Among other things this change in structure would mean that if you are a committed user of BadgerDAO’s main products, you would have more DIGG to participate in DIGG Setts once the new Setts are released.

The comparative change is:

@jonto Could you please provide the reasoning/method behind the changes?

In my opinion, there is no apparent need yet to add to Sushi Badger pool at the expense of other Setts.

The Badger/WBTC pair will already be incentivized by Sushi staking.
And we have no signal yet that we need 2.7x more liquidity there compared to what we’ll be getting in the Week 3.
If this schedule is implemented, we would probably end up with underutilized liquidity on Sushi and overutilized liquidity on Uniswap.
So on average people who trade Badger would comparatively be worse off.
If it was up to me, I would go with adjustments to liquidity mining rewards based on the weekly volume the pair gets. So the proposed change would sound good once we had the same weekly volume on Sushiswap as on Uniswap.

The Sushi WBTC/ETH comparative increase I tend to find more reasonable, but I would still like to hear your thoughts on it.

@UnlimitedPower thanks for your work. It’s very helpful

. I propose we alter course and gradually ramp up Digg rewards release by starting week 1 at 60% of the proposed weekly emission level and use the surplus in subsequent weeks to tactically add to any sett we would like to increase rewards/APY and drive TVL all without taking from another pool.

I agreew with that. especially because Curve has 3 new pools, and other protocole can also be interested to collaborate with BadgerDAO, so it’s good to keep a reserve for that.

@ygclyde not sure I got the question. What is the question lol ? Are you also suggesting to reduce emission in order keep it for a longer period of time ?

Sorry my answer is a bit messy, but i answer and reading all message at the same time. So it also seems that @Mr_Po agrees for a reduction of emission.

I also have a question related to that. At the moment people put asset or LP token on BagerDAO just to farm $Badger. But when to emission will be finish why people should continue ?
If we take Harvest finance for example, they have a 4years emission plan to realese $FARM. And the $FARM is catching fees generated by the protocol. So for the next 4years (a bit less now), it make sense to farm $FARM and stake it.
But for $Badger ? After 8 weeks , even if people staking $Badger receive fees generated by the protocol , if we don’t have emission of $Badger the APY will decrease a lot. So keeping the 8weeks emission is good for short term, TVL , APY… but what will happen in 8 weeks?

I know that new vaults should appear. But is it ready ? Do you think it will be enough to keep the TVL like that ? I’m 100% sure, I see what will happen mid-long term .

Might not be the forum for it but briefly, I believe we need to set up some sort of profit share in the next two or so weeks to give people a longer term view of the value of badger. That profit share could be emitted in badger that is bought back or some other token depending on what governance decides is best.

yes, thanks. Something like Harvest and $FARM. I think this should also be a priority. I’m just worry that 8 weeks is super quick. And if nothing is ready at the end, people will just leave …

after the 8 weeks of liquidity mining, we can always vote to continue the emission rates using the DAO treasury funds.

If you’d like to dive deeper, be my guest.

If you’d like to know more about the methods chosen and the reasoning, feel free to ask me here or in the #digg-product channel on Badger Discord.

An Update for Badger Sett Ratios.

As Bip-7 emissions for Sushi vaults are on the smaller side because they’re expected to be implemented mid-week, it seems reasonable to adjust the initial ratios. 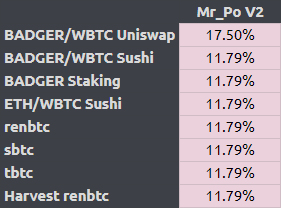 Strong work! @jonto your proposals are always so thorough.

The primary feedback I have admittedly comes more from the experience of “risk-averse DeFi investor” rather than a deep knowledge of how these emissions would actually impact user activity on the whole. However, it makes sense to me so use accordingly.

I prefer focusing emissions, at least a higher percentage, on single-asset Setts for numerous reasons. First of all, these Setts or vaults don’t suffer with the issues of impermanent loss, something myself and other users find frustrating when calculating returns from using these smart contracts. I can’t help but think that users like me, especially those who have used other platforms with a similar mentality such as Pickle Finance, would appreciate high APY Setts that don’t suffer from this complication.

I also think that by incentivizing individuals to stake their $BADGER or $DIGG individually for high return incentivizes the holding of these tokens, thereby increasing their price and driving more attention to the project as a whole. It’s not just price, but the attention it draws when a single asset has value to hold on its own.

That being said, security should also be top priority for these vaults. I’ve heard single asset vaults are more prone to exploitation, so this should be top of mind for Badger in security auditing processes.

Just my 2cents. Happy to hear some experts weigh in.

Although I am reducing badger as all other versions are since there is just that many more setts/pool to cover and only so many badger to go around but this is offset and some by the additional digg. Gradually we will need to reduce this over time but think now we want to gain TVL therefore I propose increasing rewards across the board even for the dreaded non-badger setts at they are the “money makers” like it or not. As folks gain confidence in the team, the community and the project as well as the security of there assets then the loyalty will grow and APY will settle at a lower number in the future.

Its a difficult balancing act. From my point of view the market doesn’t exist without liquidity. If people aren’t willing to take that more risky investment, putting wbtc on the line, Badger doesn’t exist at all. Staking badger at 1% a day is straight profit, 20% in 3 weeks. Emissions for liquidity need to overcome IL and more in order to be profitable. Everyone holding that staked badger needs someone to sell into.

These high emissions attract lots of liquidity so we dont have any problems at the moment. There is a rapidly decreasing incentive to add liquidity further into the LM, with a dreadful cliff at the moment. I like this as a well reasoned emission schedule for the first week of DIGG. From here on out Im in favor of decreasing emissions and coming up with a forward thinking long term solution.

I accidentally deleted my prior revised entry, unsure how I did that but here is my final version of my emission proposal for across the board increases for all setts.