With the DIGG launch, we transition from single to dual token emission model.

This BIP covers Part I of the Badger/DIGG Emission plan: the initial distribution ratios when DIGG is at peg.
Part II will introduce the new staking multiplier and DIGG peg based distribution model.
Part III will cover the extension plan for the liquidity mining program.

For determining weekly dual token emissions I’d like to introduce the Dynamic Emissions Model (DEMo). This model allows for the normalization of distributed value over time when using two tokens and a specific set of input parameters.

The easiest way to understand how it works is to make a copy of the Google Sheet and see how adjusting different parameters changes the weekly distributions.
The adjustable parameters are highlighted with color.

Here is the latest iteration of DEMo distributions and how they compare to Week 5 Badger emissions:

According to this benchmark model, the overall value distributed by BadgerDAO for the first week of dual emissions is planned to be 1.7x compared to the standard Badger weekly emissions.
The overall boost to the current Setts is 1.14x, Curve Setts keep the same level of rewards, and distribution is focused on building more liquidity for Badger-WBTC pairs.

Here’s how this model translates to Pre-DIGG Badger only distributions: 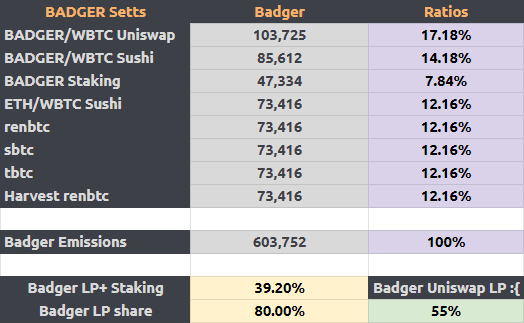 Some ratios in DEMo are strategic in nature and are meant to be decided by the BadgerDAO governance.

The first parameter to define is the % of emissions that goes to Badger liquidity providers and Badger Stakers compared to other Setts.

Here’s how this ratio looks historically: 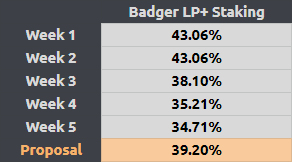 The reasons to increase the ratio compared to week 5:

What do you think Badger LP + Staking ratio should be?

I consider this situation underincentivizing for Badger LPs.

I believe a good framework for rewarding Badger and DIGG LP and Staking Setts is to issue the same amount of rewards per Badger or DIGG pooled.

So I propose a change where when all other things are equal, 1 Badger in an LP position earns the same as 1 Badger staked. This means that 1$ of value in LP earns twice as much as 1$ in Badger staking when pool size is equal.

The larger the liquidity a token has, the more stable its price becomes. So this change is especially important for DIGG Setts.

Do you agree with this framework for Badger Setts?

Do you agree with this framework for DIGG Setts?

Using the similar logic of targeting equal rewards per Badger pooled, I suggest reconsidering the emission policy when it comes to liquidity provision at Uniswap and Sushiswap.

The current emission schedule targets equal liquidity at the two DEXes.
The problem is this way we don’t get a clear signal from Badger LPs on where they would prefer to provide their liquidity.

If we target similar rewards per Badger pooled for LPs and not the similar liquidity, we allow Badger LPs to make their own choice.

This means that at equal liquidity we offer equal rewards.

Let’s imagine that Sushiswap governance decided to win the Badger/WBTC market from Uniswap and issued Sushi rewards that would support higher liquidity and volume for Badger on their DEX.
If in this scenario Badger LPs migrated and Sushiswap liquidity outgrew Uniswap’s, Sushi LPs would not lose out on Badger rewards.

At the moment of writing, there are 462k Badger tokens pooled on Sushiswap and 866k on Uniswap. This leaves us at a 65/35 reward ratio for Uniswap / Sushiswap to balance out the rewards per Badger pooled.

However, there is a complication due to staking multiplier: people who have been Uniswap LPs for a long time receive higher rewards. So the current situation is not fully representative of LPs intentions.

My suggestion is to use pro-rata rewards once we completely switch to V2 staking multiplier, and before that to give some bonus to Sushiswap LPs.

In the benchmark model, I’ve used around a 55/45 ratio which grants Sushi LPs ~1.5x bonus. However, I would prefer this parameter to be set by BadgerDAO governance.

What should Badger Uniswap / Sushiswap LP rewards ratio be at current liquidity ratio?

As for DIGG Sett emissions, I suggest to start with equal emissions for both LP pools, and then to adjust the rewards pro-rata based on liquidity.

After Badger Community votes on specific parameters of the model, the results will be integrated into the final version of the BIP that will go to snapshot vote for week 1 of dual emissions.

As for pre-DIGG launch distributions, I suggest either using the week 5 emissions model or the ratios suggested in BIP 21.

Are you in favor of using Dynamic Emissions Model for Badger + DIGG dual token distributions?

Do you agree with using BIP 21 ratios for Badger distributions before DIGG launch? 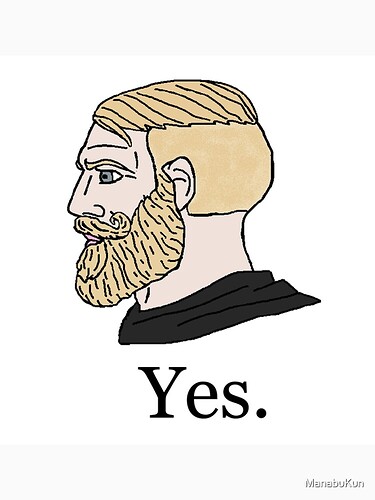 Very well thought out…thank you for the effort here.

This BIP sets the new bar for quality. It includes good explanations and the purpose of each vote as well as the most important part, a model to visualize things. Fantastic job team. Keep up the great work.

This bip make me soooo bulish on our future. We are on the right road of the DAO

That was an absolute pleasure to read @Mr_Po, thank you for the thought and time gone into this.
Also very much liking that it doubles as a BIP for week 6 emissions, nicely done!

@Mr_Po this sets the standard for BIPs in our community. As our community continues to make decisions that effect millions (soon billions) of dollars this is the level of analysis we need.

My only issue here is using rewards to drive a higher sushi LP.

I don’t see any analysis of the volumes traded to justify giving sushi LP rewards a bounus over uniswap. Also if Sushiswap is going to kick out with bonuses this will skew rewards even more.

My point here is to look at what the market is telling us vs. driving the liquidity to a market that is not well utilized to preferentially prefer these markets one over the other.

My preference would have been to reward the LP providers based on the volume generated via exchange.

My other problem is that asking people to spread liquidity out over various exchanges and products in the end will dilute general wBTC pairing liquidity. A keen attention to where the trading is the most active either via a poll of people actually trading and/or an actual report on trading volumes would be prudent here. I do not believe it is in the best interests of the community to dictate to markets where LP should go, but rather to use the information the markets are telling us to drive LP towards where it will be best utilized.

This isn’t just good for sett holders but markets in general.

Other than the above comments the proposal looks good.

Good job @Mr_Po ! Your analytical skills are invaluable to our DAO community. Much appreciated.

Looking forward to the next parts II & III. Especially part II which would be the most challenging one.
For part I/ Sushi LP should we factor in the Onsen xSushi rewards ( for as long as they are there)?

Here’s the live data that was used to arrive at the suggestions made https://explore.duneanalytics.com/queries/16513#33315

Let’s see how that first week boost turns out and adjust if necessary for week 2. Regardless I’m super excited and stoked to see the development and growth of the community towards digg, badger and the whole ecosystem. congrats everyone!

Can someone explain to me plz why this is true? The apy’s for lp’s are much higher (2-4x, according to sett vision), also when adjusted for size.
When u look at week 5 emissions, dont lp’s earn >2x badger rewards vs badger lp (because 2 pools)?

What am i missing?

Awesome job on this!

Thanks for the well thought out proposal.
YES! YES! YES!

Say it with me #badgerfam

I love the effort! Yes please! I’m so pleased to work with awesome people and seeing lovely hard worked efforts!

This is exactly the kind of quality proposals, well thought, modeled and analyzed that I like to see. It gives analysis, data, arguments: all the elements to make an informed vote.

I hope all future proposals that are aimed to adjust parameters (or initial supply) are done like this one. For me it is essential for the governance process.

I’m LP provider from day 0 and I don’t get this Sushi bonus idea.

I’m not sure why we should promote providing liquidity on Sushi in the first place.

But we can assume we want to have the same liquidity on both protocols. Even without bonus new LPs are getting better conditions on Sushi:

I don’t feel fair that I had to wait weeks to get x1.85, taking the biggest risk at the beginning of the project and now someone will get it from day 0 ‘because it’s Sushi’.

I’m thinking we should use the unclaimed airdrop $BADGER tokens for emissions before anything else. This has been discussed in a general discussion thread a couple weeks back and everyone seemed to agree it should be airdropped to current $BADGER stakers similar to $DIGG distribution.
But I think what’s best is to use them for emissions at this point.

@Mr_Po Do you mind adding this to BIP 21? Or should it be added on to a BIP at a later time? Doesn’t really matter.