Paying twice for liquidity on Sushiswap and Uniswap

Hey folks! I have some questions about how you are handing liquidity provisioning. This could lead to a proposal, but I wanted to get some background information first.

I noticed that BIP-26 rolled out on the order of 80,000 BADGER each in payments to liquidity providers of the WBTC:BADGER pair on Uniswap and Sushiswap, on the order of 160,000 BADGER total (and I see that they get some DIGG issuance too). Due to price appreciation of the incentives, this has resulted in very large liquidity pools: $60-70mm on each platform, nearly $135mm in total.

A few questions for discussion:

Gauging the sentiment before formulating anything more specific as a proposal. Thanks in advance for sharing your perspective

Great points Brandon and I’ve been thinking about what the right incentivizes are necessary at this point since they are both relatively high APYs.

I see the value in consolidating as well.

Which venue would you suggesting consolidating to?

What APY target do you think is enough to keep liquidity high without driving users to stop LPing?

The original move to sushiswap was part due to strategic moves (onsen program allowed for higher native ROIs for our users) and part due to repeated attempts to get Uniswap to modify their routing with no response from Uniswap, leading to liquidity being siphoned from our LPs through arbitrage.

Uniswap has since modified their router to use wBTC, which fixes the latter issue, but the former point is still valid. If we were to move to a single provider, I’d say Sushi would make the most sense for our users and for badger.

Pools for Digg and Badger have pretty similar liquidity on both Sushi and Uni. I’m not against moving to one or the other and would lean towards Sushi for the added tokens.

Initially we offered both pools and it has allowed the market to decide where they want to place their capitol. I suspect that the Sushi Badger pool would be much higher right now but people didn’t want to break the multiplier to switch from Uni, and so are perhaps not a great example of the market’s desire.

If we are going to look at reworking the Setts, perhaps we should consider Balancer. Their v2 sounds rather interesting, although not sure about the eta.

At any rate, I’m totally up for exploring some options.

For those who are not afraid of IL (effectively long term holders), the setts do not currently offer enough advantage at this time compared with LP. I’ve migrated everything out of setts now.

My untrained opinion is that UNI is more profitable fee wise than Sushi and less risky from both a security and investment side (since earning in xSushi is a profit-based risk). There was a scare on Sushi a few weeks ago and it made me feel a bit uneasy and I removed everything from Sushi. But, the Badger project as a whole seems to prefer a stronger relationship with Sushi due to UNI’s lack of involvement.

Hello @bcmakes, welcome to the forum

The 80,000 Badger per LP you reference is from Badger only emissions before DIGG launched. 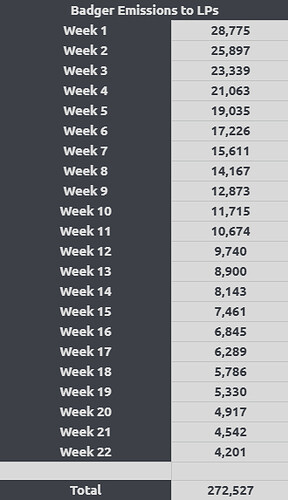 The price appreciation did indeed affect the liquidity, but mostly due to the underlying assets’ growth.

Badger LPs’ incentives didn’t grow proportionally, as the amount of DIGG distributed towards them changes from week to week due to the way dual emissions work.
For example, if we were to translate DIGG incentives into Badger at the beginning of Week 4, a Badger LP would be receiving 30,518 Badger.

As you can see from the schedule, the overall incentivization for LPs does get reduced gradually over time.

In my opinion, if we talk about mitigating an unnecessary dilution, it would be more reasonable to raise the question of reducing Badger staking rewards rather than reducing LP rewards.

When we pay for staking Badger, we essentially pay people to hold Badger. There’s no productive value that comes from Badger staking, no network is being secured, no blocks are being validated etc. And no risk is being taken comparatively.

On the other hand, Badger LPs:

Having larger liquidity pools also provides downside protection for Badger price, so arguably, there is no such thing as useless liquidity. Being high up in liquidity rankings also serves as an advertisement to the project and adds legitimacy.

Since paying for identical liquidity in two venues is more expensive for BADGER holders, and splitting liquidity is bad for users and bad for Ethereum, is there interest in consolidating the liquidity incentives on a single venue?

The median trade size on Uniswap is currently sitting at $1307.
For the overwhelming majority of trades on Badger pairs on Uniswap and Sushiswap, the slippage is negligible.
And large size traders can utilize full liquidity via aggregators.

In my opinion, there is no good option to consolidate liquidity currently.

Given our partnership and collaboration with Sushiswap, consolidating liquidity on Uniswap doesn’t look like an attractive option.
And leaving Uniswap for Sushiswap would be quite costly.

a) Badger user acquisition would suffer + Trading volume would get underserved

Also, Badger has larger volume on Uniswap than on Sushi and users don’t migrate as easily, so the trading volume overall would likely be served worse than it is now.

b) LPs would earn less

Given our partnership and collaboration with Sushiswap, consolidating liquidity on Uniswap doesn’t look like an attractive option.
And leaving Uniswap for Sushiswap would be quite costly.

I’m starting to get the feeling that taking a more agnostic approach to partnerships would benefit the Badger community more. Instead of picking one provider over the other, I think the overall community would be served better by making more of an effort to also reach out and work with UNI.

I don’t know what that looks like, in this case, it could be a simple press release, and maybe UNI doesn’t want that, but for the benefit of the larger picture, I think it is worthwhile to try.

I certainly appreciate the need for this kind of conversation, but I’m going to push back a little on some of your premises, if I may.

This is a lot of liquidity. A million-dollar BADGER buy has a less than 1.5% impact on the price when split across Uniswap and Sushiswap.

Is it a lot of liquidity? I don’t think it is. I mean for a project like this, it feels like a lot. But I guess it depends on what kinds of goals the community has, and what kind of role badger price stability has. Maybe we have different mindsets, but a million dollars having a ~1.5% impact on price is a lot. High liquidity is a form of security, because it tends to mean more stable prices. Stable prices mean that the underlying asset has better utility for all sorts of things, such as serving as collateral for loans. To that end, I’m of the mindset that, if anything, there should be more liquidity.

That’s debatable, and only for now. For someone looking to swap, it’s close enough to identical. But not for LPs. And in the near future, as Uniswap and Sushiswap (and others) start to roll out their L2 solutions, they may wind up being nothing alike in terms of networks, user base, etc. And sort of playing on my previous sentiment above about liquidity being stability, I’m also of the mind that the more DEXes that are in use, the better, because that mitigates any potential single point of failure.