This project is definitely moving in the right direction, and at a fast pace! Badgers don’t waste time, let’s keep digging!

It doesn’t really matter whether the multisig members are known or not, because there’s no way to prove that the multisig keys are in unique hands. For instance, one person could have created all 5 keys then distributed them to 4 other people. The creator would still have all 5 keys. This is an inherent problem with using multisigs for admin keys, and is why they may be good for appearances but terrible for improving trustlessness.

The timelock is the only thing of value that’s being implemented here.

There is no mechanism being proposed to keep the dev multisig signers in check, so there is effectively no decentralization occurring. The proposal, as it currently stands, is just theatrics.

At a minimum, this proposal should be rejected and replaced with a proposal that:

@arkgenesis you are always a valued member of the community, you are very committed and always try to contribute and improve the conversation. However in this case, I feel obliged to remind you about the community guidelines, especially:

Be Agreeable, Even When You Disagree

You may wish to respond to something by disagreeing with it. That’s fine. But remember to criticize ideas, not people… Instead, provide reasoned counter-arguments that improve the conversation.

You raise some valid points, however you also have to understand that full decentralization is a process and should not happen overnight, especially with a project this young in active development. I think that BIP 33 is one step in the right direction (better than what we have now and necessary) and this is why I support it as phase 1. I don’t see it being just theatrics as you say. Sorry to differ.

However, I would also love to see an outline for future phases (the complete DAO decentralization roadmap - even if it is only a sketch at this point). Because I would like to see what the vision of the core team is, what the next steps would look like, and potentially have thorough discussions as a community around that.

I reached out to you in discord and really appreciate that you’re here in the forums bringing up your points. This is very helpful, and not critical or spreading unnecessary fud. I agree with the spirit of your points, but don’t know the implications or repercussions of meeting your points for further decentralization, therefore I can’t vote for them/against them.
For example, on point three, I am not sure what the implications would be if treasury oversight was completely in the hands of the DAO. In that case, it would seem whales would have the most influence on treasury, which may or may not be in the best interest of the product. Whereas the developers and founders of the DAO have inherent interest in the product and making the treasury function as beneficially for the community as possible. This is just an example, and I think a BIP with your requests with an explanation of the repercussions/implications of your points would help clarify your rationale.

(post withdrawn by author, will be automatically deleted in 24 hours unless flagged)

The way you are twisting the facts reminded me of the GNR lyrics:

"And in this corner, weighing in at 850 pounds; … BADGER DAO
GET IN THE RING

I hope you know how a gnosis safe and general multisig contracts work, nobody is ‘creating keys and distributing them’. You enter with your public key and the private key is yours and only yours.

It seems that you are the one that doesn’t understand how multisigs work, gnosis safe or otherwise. One person can easily create a gnosis safe multisig with 5 keys that they themselves created, then distribute private keys to 4 other people while holding all 5 themselves.

So we’re ignoring the fact that it is very much possible to limit the transactions that a certain multisig wallet can do, simply by not having the same wallet be governance for every smart contract and every function

I have no idea what you are talking about. In BIP 33 it clearly states that the dev multisig will have all of the god-mode powers that it has currently. It is not being limited based on this proposal.

The multisig signers are public and known members of the community, so saying that all of them need to be kept in check is quite absurd. There’s a certain level of trust in people required to even function in society, so stating that we now cannot trust people that have acquired the trust of many others and are known for that, is, well, again. absurd.

Are you new to crypto & DeFi? Are you new to Badger, in fact? The entire point of this project is to empower the community to make decisions without a core team calling the shots. It doesn’t matter in this case if they are known or anon. The reason for this isn’t just about trusting integrity, but also about trusting that the core team won’t be compromised - either by thieves, hackers or governments. Saying that users should just be expected to trust in the dev team for eternity without making constant efforts to decentralize is completely off base.

It seems that you have a bias against devs.

Agree as far as DAO should have a vote on proposed multisig signers, as you must know, having DAO propose and vote individual ones is very much outside the realm of practicability.

Why is it outside the “realm of practicability” for the DAO to actually control this project? It is, actually, the entire aim of this project… are you sure you’re not in the wrong project?

You seem to hate intelligent debate. Good luck in your future endeavors.

The only thing that makes BIP 33 better than what we have now is that there is a timelock added. There is no purpose to the additional multisigs as their decisions can be easily overridden by the god-mode dev multisig. This is the very definition of decentralization theatre.

For example, on point three, I am not sure what the implications would be if treasury oversight was completely in the hands of the DAO.

I created this video demo for you, sir, to show you how anyone can create all signing keys on a multisig then pass them out. 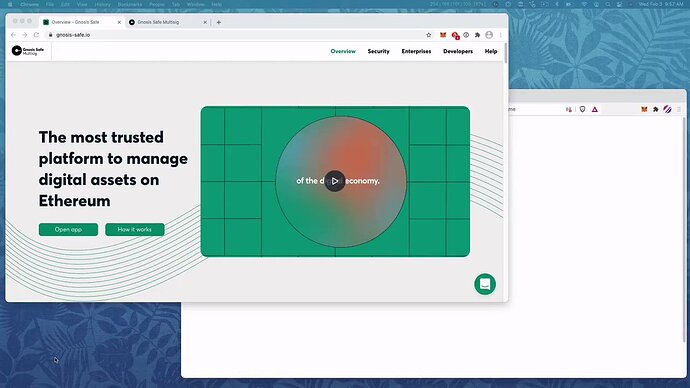 Just made this quick video demo of why a multisig admin key does *not* increase trustlessness for a DeFi project. A single person can create all signing keys and just hand them out to signers, while essentially keeping copies for himself. https://t.co/daZLk2tEaT
DeFiFrog February 3, 2021, 10:05pm #41

Noting here that multisig is only a stop-gap for true decentralized consensus gov…something which is still largely in beta evolution ecosystem wide. The entire concept is unproven an largely experimental…but we should be able to work it out eventually.

It seems that you are the one that doesn’t understand how multisigs work, gnosis safe or otherwise. One person can easily create a gnosis safe multisig with 5 keys that they themselves created, then distribute private keys to 4 other people while holding all 5 themselves.

Yes, this is true as you have proven with your little video. But does that mean that the keys will be created this way? Is it the only way? Do you think that the community members or industry leaders that will hold keys will actually be accomplices of such a deception?

This to me seems just like a very lame attempt to create FUD, or you are totally new to this. Since I don’t know you, I can’t say which of both it is.

Please observe community guidelines: You may wish to respond to something by disagreeing with it. That’s fine. But remember to criticize ideas, not people… Instead, provide reasoned counter-arguments that improve the conversation.

I am really sorry to see that it has become personal for both parties (both Chris and the team) instead of listening to each other’s arguments and build from there, which is a necessary condition for any civil conversation. This is why this is getting nowhere.

The questions asked by @fsbadger above were ignored and I think they are important. I know that the core team is very busy at the moment, but I would love to see more interaction addressing community questions or concerns. Just feedback.

I am also sorry that the team did not outline the plan for future phases (even a rough indication of what the future might look like and what the next steps might be).

Please observe community guidelines: You may wish to respond to something by disagreeing with it. That’s fine. But remember to criticize ideas, not people… Instead, provide reasoned counter-arguments that improve the conversation.

My question wasn’t meant as an insult. It was sincere.

Thank you @cryptomooniac. I’m surprised I didn’t see any answers or discussion too. Multisig is quite the beast and a full understanding of risks is paramount to a properly architected system. Distributing keys and the amount of key holders is only one very small detail when considering an implementation.

Thank you for your input @chrisblec @cryptomooniac . $Badger DAO is just starting and I’m glad everyone is having these discussions now. It’s good to have opposing views as it allows for improvement. We shall continue to work collaboratively without personal bias and judgment for the benefit of our $BADGER family, its users, and continue innovating and leading the DeFi space.

Honestly given that I am a token holder and member of a number of DAO’s, Maker, /r/Ethtrader, 1Hive and now Badger etc. one really has to wonder what ‘decentralization’ means when whales (in every one of the above examples) literally 5-20 people have enough voting power to drive governance.

I see nothing different here at Badger. So I think we have to get past this idea of ‘full decentralization’ at least in the above context and work on secure centralization. What features do we need to put into place so no single actor can control the system. Frankly the fact that one can sybil this process one person could look like 5-20 and control everything. I don’t know any way out of this other than some form of Identity checks. As one who uses pseudonyms a lot I understand the desire for anonymity but when it comes to strong checks on control is where some of this stuff breaks down.

There is nothing magical about tokenomics, distribution etc. that I believe inherently solves this problem and would love to see some real discussion around this issue lead to actionable results.

@chrisblec appreciate the comments but having my own issues with ‘form of them’ I would encourage some sensitivity in presentation.

BTW: Based on the above I pretty much agree with most of your criticisms. One thing I try to do when I have a criticism is to have at least one possible solution. Honestly in the above I am coming up completely blank.

This a great step toward a living decentralized entity, exposure to bitcoin on ethereum