In DIGG Buy Low - Sell High Sett, this ratio is a variable that changes based on DIGG price deviation from the target BTC price. 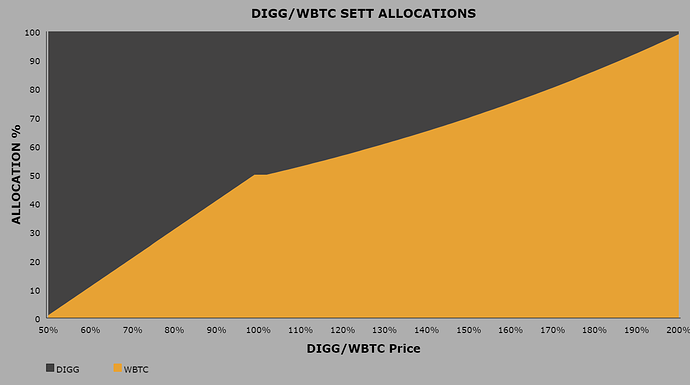 The higher the deviation of DIGG price from BTC price gets, the stronger the cumulative Sett’s buying or selling pressure becomes.

To incentivize money to stay in the Sett, I suggest using a 0.5% withdrawal fee and the multiplier for the staking rewards similar to other BadgerDAO products.

As the Sett’s usage would provide direct value for DIGG as a product, I suggest incentivizing it with continuous DIGG staking rewards. When it comes to developers, instead of a performance fee, I suggest rewarding them with a small percentage of the staking allocations the Sett will be getting.

Would you like DIGG Buy Low - Sell High Sett to be developed?

I think it might be interesting, however, to utilize the Hegic platform options to hedge positions with fixed-cost options contracts. Actively buying and selling can impose unknown costs, whereas options contracts are fixed-cost. Because the rebase cycle will likely conclude within a day, the options contracts would be short-dated and likely carry relatively low cost of purchase.

Doing so would imply DIGG is listed on Hegic and the automation could utilize Keeper jobs similar to Hegic’s current deployment. Or, the WBTC contracts could be purchased on Hegic without the need for the sett to custody the WBTC required to complete the buy-sell.

One downside would be that - rather than active buying/selling on-chain - LPs would experience reduced transaction volumes the sett would otherwise provide.

On the other hand, finding a way to list DIGG on an options DEX with arguably great early success (from a volume perspective) might create a lot more exposure and utilization for DIGG in other applications.

Very interesting and I think it actually addresses something a bit different than my original rebalancer sett.

Buy Low - Sell High is much more focused on the peg and amplifies moved back towards the peg and dampens moves away from the peg. It also is much more aggressive with its capital allocation.

I need to look through the provided sheet to form a real opinion on it but very interesting!

Interesting concept. You did lots of homework.
Thanks.

I think it would be more robust to use several wrapped bitcoin, like WBTC, renBTC, etc.
WIth this approach we cover a possible problem (if any) with WBTC.

Also, we need to take into consideration a possible “flash loan” attack dumping the ratio between DIGG and WBTC

This is really interesting.

Would the assets deposited in the vault be the badger<>wbtc LP token?

Would rebalancing happen multiple times a day or at a certain time right before rebase?

These are very good questions.

Would the assets deposited in the vault be the badger<>wbtc LP token?

I think it could be an interesting path - to use DIGG/WBTC LP tokens as the default representation of DIGG token, as the ‘common language’ it uses.
If most of DIGG tokens would exist in BTC backed liquidity pairs, wouldn’t that be a good outcome for DIGG?

Using DIGG/WBTC LP token as a default deposit route could contribute in the right direction to the buying/selling pressure the Sett provides.

A withdrawal could consist of the 50/50 LP token + outstanding DIGG or WBTC.

If we had multiple DIGG Setts, building the pathways between them based on LP tokens seems reasonable.

Would rebalancing happen multiple times a day or at a certain time right before rebase?

The original idea is to rebalance right after the rebase happens. This way we buy when supply gets scarce and sell into supply extensions.

The timing of the sells raises a crucial question about the method of buying/selling and interactions with other market participants.
I tend to think that the simple presence of the Sett will affect the market a lot.
You don’t want to buy or sell against the will of a giant badger whale.
But I wonder if there is a way to take advantage of knowing its actions.

Following up on the DIGG<>WBTC LP token as the common language.

Imagine if DIGG<>WBTC LP token gets adopted on a lending platform.

Lenders could then use their LP tokens to mint USD while keeping exposure to their Bitcoin and DIGG upside.

Borrowers could borrow the LP tokens and stake them in Setts.

DIGG would get a lot of locked liquidity from it - and thus even more stability.

This is an important point and don’t think it only applies to the LP token. DIGG only vault and the representative share, bDIGG, could accomplish the same and potentially more effectively since it’s a single asset.

bDIGG would be the first and only rebasing asset that can be used in other DeFi protocols.

I also believe we should spin up our own lending/borrowing solution along with the ability to use Sett vault positions as collateral.

That would be nice to provide a solution for lending/borrowing. This is a huge industry and we should take advantage of it. Again, I emphasize the importance of the BADGER token. I think that’s what should be driving value to the badger dao through fee distribution, etc. The token can provide both governance and value for the protocol.

Agreed with this. We can’t be reliant solely on a single btc representation. Introduces too much risk, and I think thats a point not just for Digg but also Badger’s approach in general with a very heavy weighting to wbtc products.

This is an exciting idea/strategy.

I think it should be technically feasible to do this using limit orders as opposed using uniswap or another exchange. This may also reduce the likelihood of flash loan attacks.

I don’t know if it’s best to build a custom limit order contract or just find a way to place them with 1inch and other dexes though.