Lots of things are in motion at Badger as we enter Q3.

Gravity and its new graviAURA vault offer many interesting opportunities to build on top of Balancer. The model of charging a fee on vote weight also creates a different way of thinking about revenue and delivering value to the token holders.

Currently, the ibBTC vault is offering no underlying yields, and the DAO is emitting a lot of BADGER there without taking in any fees, and it’s a similar situation with Arbitrum vaults on a lower scale.
The general direction of the BIP is to reduce emissions until we launch the vaults with underlying yield where emitting is more promising.

Emissions and the Badger Boost system are an important part of our tokenomics, and Q3 will bring a number of new products where these concepts can be applied and evolved.
As new vaults with higher yields become available, the DAO will work with the Badger Council (and in public RFF) to move emissions from ibBTC to higher-yielding vaults.

The state of the Curve + Convex yield influence market, together with the structure of the LPs, currently doesn’t allow us to have BTC-heavy pools with sustainable yields. This is due to our inability to cost-efficiently incentivize enough CVX voting for the AUM that seeks yield in a single-sided BTC pool.

We need to do a bit more work to figure out how to make graviAURA work well with stableswap pairs, but once we do, there will be opportunities to create pools that are mostly BTC and have relatively little IL against graviAURA that should yield and scale quite well.

In the Convex + Curve ecosystem, the goal is to keep the flywheel that is rolling, where we have a Badger LP and bveCVX as native assets in the Boost, and the Boosted rewards on bcvxCRV: 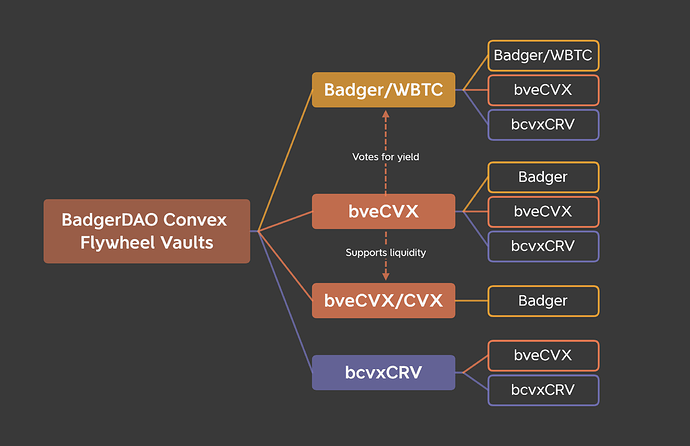 The flywheel keeps performing well, so no change is proposed to the bcvxCRV emissions.

Leaning on the Badger Community Council:

The final pools and allocations would be subject to change and would need to be approved by the Badger Council. The Badger Council’s membership is ratified by BIP-86. Its mandates beyond these decisions are currently awaiting sufficient forum votes to move to snapshot in BIP-93.

Due to a lot being in flux and otherwise reduced emissions, it is proposed to increase the Council allocated budget from 8,000 to 13,000 BADGER per week. Note that in Q2, the only Council decision to allocate said Badger involved up to 25,000 Badger allocated to bootstrap graviAURA in a one-time event. This event will run into July.

The cap on the emissions budget would be the same as in Q2.

Our direction with emissions is to stop incentivizing vaults that bring minimal revenue to the DAO, and the primary recipient of cost-inefficient emissions is the ibBTC vault on Curve.

The Arbitrum ecosystem doesn’t have many yield opportunities at the moment, with minimal yields on Curve and Sushi. Incentivizing 300 $k worth of Badger liquidity on Swapr also doesn’t sound prudent given that there isn’t much to do there now with Badger tech. If new opportunities arise in the ecosystem, we’d be ready to deploy the strategies, but for now, it’s more of a liability to the DAO. Plus, the gas fees haven’t been that ridiculous lately, so potentially a part of our userbase can migrate back to Ethereum and participate in the Balancer + AURA play.

The BIP outlines the general budgeting and seeks approval for redirecting emissions from the vaults mentioned. It offers a general direction of change but also relies on Badger Council to ratify the specifics and whatever details need to be changed closer to the launch dates.

Due to the time constraints of the current schedule ending on June 30, the 48-hour snapshot will be posted no later than on Monday, June 27.

The BIP is subject to change based on feedback on the forum and the #rff-emissions-q3-2022 channel on the Badger Discord.

What about reducing arbitrum emissions instead of ending them altogether?

Reducing the emissions could be viable if there was some base level of underlying yield to become more cost-efficient “against.”
Unfortunately, that is nearly impossible at a 1.8% CRV APR on renBTC on Arbitrum.
The last time I checked, Badger was earning about 6 $k / year on its renBTC vault on Arbitrum from performance fees - and about the same on Tricrypto Arb vault, which has no emissions.
So first, it’s hard to justify spending 13x+ on a vault than what it earns.
But more importantly, at this scale of revenue on Arbitrum, it’s hard to justify the tech maintenance work related to these emissions.
So it’s less about trying to spend less Badger there - and more about trying to focus the tech work where there is more upside for the DAO.

There are things to do with Badger on mainnet, and there should be more to come once AURA goes fully live. The fees on mainnet have been decent lately, and afaik one can even use Across bridge to transfer Badger directly without having to wait a week.

Makes sense, but everything around this is unfortunate.

Badger has always relied on other protocols and their emissions. Selling them is where most of the underlying yield came from (and also the revenue).

What makes you think that AURA will be different over the long run? At first maybe the yields will be attractive, but then, after they eventually decrease as they will, what?

so we can expect the already low APY of the ibBTC sett to get close to 0%?

What makes you think that AURA will be different over the long run? At first maybe the yields will be attractive, but then, after they eventually decrease as they will, what?

The short answer is that Badger would have pools with self-sustainable underlying yield.
So it wouldn’t be in a position like it is with ibBTC now, where the asset has zero underlying yield and no reasonable opportunity to create that yield.

So as long as AURA and BAL distribute emissions, there would be yield in Badger vaults, and BAL emissions schedule is a long one:

Imagine a pool that’s 90% BTC and 10% vote locked AURA that votes for itself.
This type of pool would have minimal IL and it would utilize the whole vote weight under locked AURA, creating scalable and sustainable yields, and protecting the ecosystem from mercenary liquidity, voting, and bribing.

If the BIP passes, the short term emissions for ibBTC would be reduced by ~24%, being effectively reallocated towards graviAURA bootstrapping, which for the time being is voting for the Badger LP on Balancer very cost-efficiently.

Then, as far as expectations go, I plan to suggest to the Council to migrate the rewards from ibBTC, but only when we have something better than that, i.e. new pools with BTC exposure and higher underlying yield. The vaults that can feed the DAO and make it grow to become a valuable ecosystem layer of DeFi.

I would suggest not increasing the budget from 8K badger to 13K badger. Did I miss a post where it is explained why the council needs more budget? I think that things will always* merit wanting more budget, but unless its clear on the purpose or use of funds, I am hesitant to vote in favor of this.

It’s not really budge for the Council. It’s emissions that are set aside for new vaults created by the core team during the quarter so that new products can be quickly brought to market if needed. A good example is the recent graviAura launch. We expect more vaults related to this ecosystem but we’re dependent on Balancer and Aura votes before we know exactly what will be created next.

New emissions/products will be discussed in the Discord and members will have the opportunity to provide feedback.

Does that address your concern?

Sure does, thanks for explaining.