Status: Under discussion here and in the #rff-emissions-q2-2022 channel on the Badger Discord.

Note: The original BIP has been revised with:

Badger manifested over a year ago with a mission to support Bitcoin in DeFi. We have learned in that time that there is an enormous amount of BTC looking for single asset yields, sufficient to arb just about any possible opportunity down to <5% returns. It has become clear that yields for a fully backed single asset BTC position are not something the DAO can support, especially with the way the Convex market has evolved.

We took the first quarter of this year to consolidate these learnings, leading to working on upgrades to the Vaults product, launching Citadel, restructuring bveCVX, and considering upgrades to ibBTC.

The bveCVX restructure recently passed in BIP 87 makes the vault profitable and self-sustainable. The new bveCVX has found a good market fit, demonstrated by a substantial increase in bveCVX deposits in the last couple of weeks. At the same time, it has created a regular buy pressure for Badger and supports the distribution of a significant amount of CVX and CRV yields to BADGER/WBTC on Convex.

With nearly 100,000 treasury CVX dedicated to generating yields on WBTC/BADGER instead of earning yields and bveCVX fees supporting its own liquidity, spending treasury Badger on emissions for Badger/WBTC on Sushi and bveCVX/CVX becomes redundant.

Other than bveCVX, which no longer receives emissions from the treasury, all of our vaults currently pay out more in Badger Emissions than they collect in fees.
We think there is medium to long-term value in maintaining depositors holding both BTC and BADGER. We also find the strategic value in keeping Badger distributions to bcvxCRV being part of Badger flywheel Vaults. Other than that, we see no reason to incentivize AUM cost-inefficiently. 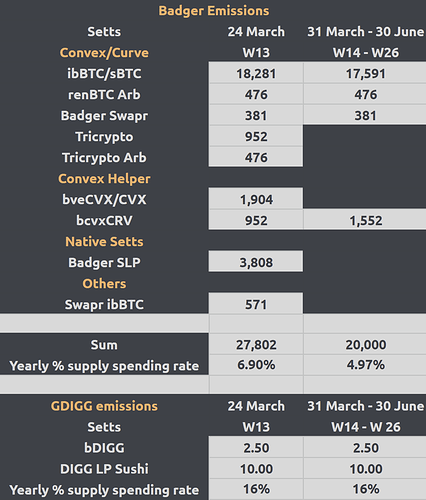 For the non-BTC vaults, the goal is to make them profitable, and the BTC vault profitability is something we plan to refocus on later in the year.

BadgerDAO is pushing quickly forward with new vaults, many of which are not single asset BTC and have the potential to generate double digit returns. The option to incentivize such vaults with BADGER from the treasury remains on the table, if economically sensible.
Badger treasury has plenty of capacity beyond the current level of rewards to incentivize new products and initiatives once they’re developed.

The proposed schedule reserves up to 8k Badger per week to be used with the Badger Council’s approval for testing and early implementation of the new emissions programs.

With BIP 87 passing, bveCVX has become self-sustainable and profitable for the DAO, while supporting its own liquidity and voting extra for Badger/WBTC on Curve.

Instead of spending Badger emissions on it, the Vault now buys Badger and emits it to bveCVX and bveCVX LP holders.

bveCVX is currently voting with about 170k CVX per round on WBTC/BADGER yields and buying about 25k BADGER every two weeks to emit to bveCVX holders and LPs.

Thus there is no particular need anymore to emit extra Badger to BADGER/WBTC on Sushi and bveCVX/CVX LP on Curve.

As for the emissions going to the rest of the vaults, none of them are particularly cost-efficient or bring a lot of TVL or revenue to the DAO. All of our non-BTC vaults sit at under 1% pool capture, and pay more than 2x the value in emissions than the DAO takes in fees. If we stop the emissions, the vaults become cost-efficient by default, and it also makes the UX a bit cleaner, as users would be able to deposit in as many vaults as they want without worrying about it affecting their Boost in a negative way.

If the treasury runs out of DIGG to emit, the default approach would be to use DIGG from DIGG’s treasury-controlled liquidity. There will soon be a governance around minting new DIGG to pay for emissions in 2022. Digg may also be minted for distribution to RemDIGG HODLers.

For Badger/WBTC Convex LP the DAO will launch a vault charging the standard performance fee of 20%. The Badger portion of the LP there will be counted as native in the Boost similar to Sushi LP. Badger in Sushi LP will keep being counted as native balance in the Boost. If this BIP is not approved by the end of the Q1 emissions, the Council will be asked to repeat the March 24th schedule for 1 week while governance concludes.

Due to the time constraints, the 48 hour snapshot will be posted on Monday if it has over 35 votes.

The BIP is subject to change based on feedback on the forum and/or the #rff-emissions-q2-2022 channel on the Badger Discord.

I understand the thinking. But if only btc setts are boosted then as someone who parks their curve and convex on badger i’ll have no reason to keep any badger whatsover. Is that the intended consequence?

Outside of boosted yield that Badger provides suddenly there are other comparable options that won’t charge me a fee to use. It also appears that bvecvx/cvx could be in for a reasonably steep drop in yield even after the 5% liquidity fee from bvecvx. Is that of concern?

Ultimately I get the vision but perhaps, given the sweeping changes here, instead of voting a quarter’s worth of emissions we do a shorter period of time to analyze the impact.

The problem is right now, you keeping your CVX on Badger is costing us more in yields than we’re making in fees.

Without BADGER emissions bcvxCRV charges a 10% fee vs I think 5% or something from Union. Large cvxCRV HODLers may choose to farm their CRV in a different way, which is fine. For smaller HODLers or people who don’t want to deal with it, bCVXCRV continues to be useful as an ecosystem helper and has some of the lowest performance fees of any BADGER vault.

In terms of giving curve/convex maxi’s a reason to HODL badger, I could see why this is a good argument to keep some badger emissions going to bcvxCRV. I’d propose that they shouldn’t be more than like 1.5x fees in USD value though, and if this falls out of whack we should cut emissions.

I’d be amenable to adding in a revision clause in which the council will review impact of the emissions change on a defined set of KPIs after 2 weeks and again at 1 month with an option to re-enable emissions back to CVX products.

It also appears that bvecvx/cvx could be in for a reasonably steep drop in yield even after the 5% liquidity fee from bvecvx. Is that of concern?

It shouldn’t be. Afaik the liquidity fee this week resulted in 2142 Badger going to bveCVX/CVX LP, while before that we were issuing 1904 Badger using the treasury funds.

Plus the underlying bveCVX rewards should be active too, so overall the liquidity should scale well with the bveCVX growth - better than with the previous approach with scheduled emissions.

The council already has 8k a week of funds to do that with, so I don’t think that requires a change to the BIP text, but I’d also be fine with that happening.

Outside of boosted yield that Badger provides suddenly there are other comparable options that won’t charge me a fee to use.

bcvxCRV has extremely low fees and unique proposition in distributing interest bearing bveCVX instead of selling it into more CRV.

Union’s fees are considerably lower than the above with 6% + 0.25% withdrawal, but they also sell the CVX and don’t offer you to have an interest bearing CVX as the reward. And if you want your CVX as CVX, you have to withdraw, pay the 0.25% fee, buy CVX - at which point the whole thing doesn’t make much sense.

So I’d consider bcvxCRV being very competitive here without the emissions.

Honestly, yes. I think that is how most people found Badger lol.

It was advertised quite aggressively that you can deposit your funds at badger and still do better net of fee if you had a high enough stake ratio.

I always assumed that was just the DAO buying strategic assets with Badger. Without the negative stigma of instead just buying outright (You get the dumping your token for another token stigma).

Well, not that I think that it should be the only reason to hold Badger, but I get the point that having Badger Boosted emissions for bcvxCRV is a good UX element that is constituent to the Badger flywheel.

From the perspective of the DAO, we would like to keep distributing the governance rights to the users in the app.
With the upcoming vaults generalization, we will potentially have more users who choose to not have any BTC exposure at all.
With the flywheel/ecosystem type of vaults, they could still get the exposure to Badger through bveCVX + bcvxCRV as ways of accumulating Badger and utilizing it in the Boost.

The change compared to the original one is in:

The total amount of Badger emitted per week would change from 19,138 Badger to 20,000, which means about 5% yearly supply spending rate.

The reason for increasing bcvxCRV emissions is to level out the max Badger Boosted APR on ibBTC and bcvxCRV vaults. So that a user could have ibBTC as non-native balance, bcvxCRV - or both, and it wouldn’t change much the amount of rewards they’re getting on their native Boost balance.

The original post has been edited with the revised proposal.