Scope: Give NFTs a BADGER denominated value in Boost

There has been extensive discussion around how to incorporate the Badger NFTs into Badger Boost. A previous BIP proposed a model but the direct community response paired with less than overwhelming signaling in the vote was taken as a signal to go back to the drawing board.

Overview The BadgerDAO team and community have always been interested in exploring the overlap of NFTs and DeFi. There have been numerous events and drops that have resulted in the community accumulating NFTs but up until now they havent been of much use. In this proposal i have laid out a model for including NFT holdings in Badger Boost with a couple parameters that will be, if enabled, under the control of BADGER holders going forward. Extensive discussion around the model was had here: http…

There are some upcoming proposals for further changes to boost that will go through the rff>BIP>Snapshot process but it is important to settle the NFT question now so that it doesnt get put off further until after all of the upcoming discussions and changes are done. This proposal is just to set a starting baseline for including NFTs. It can be updated or modified in any way in the future as boost and the Badger NFT ecosystem continue to evolve.

The newly proposed model is simple. Each NFT will have a BADGER value associated with it with which it will count towards boost. Each group of NFTs has a baseline value each one of the unique NFTs is worth (for boost only, not redeemable) and then the rarity determines each individual NFTs BADGER value. So far each of the BADGER NFTs has been an erc-1155 meaning that there are multiple of the same NFT (tokenid).

The value breaks down as below:

This will amount to up to 100,000 BADGER value available (towards boost only) immediately. The below chart shows the detail. 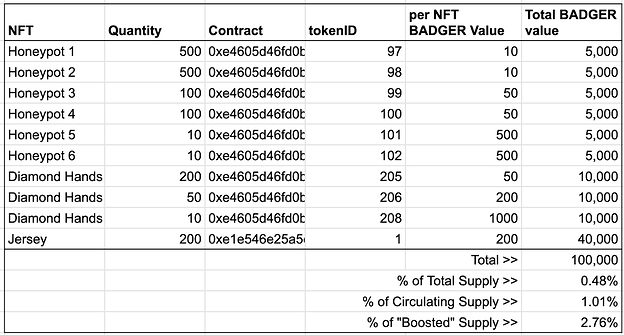 This adds up to just under .5% “boost inflation” on total supply, 1% of circulating, and 2.76% on BADGER that is actively contributing to boost. As stated above this is just a starting point. There are also multiple other fairly significant proposals coming that will affect boost and the NFT scores can always be re-assessed after. When new NFTs are dropped governance will be needed (as either part of the drop or after the fact) to assign a Boost value.

There is one additional open question. Whether or not to count all the NFTs an address has even if they are the same one. All of the current NFTs are erc1155 meaning that there are multiple of the same tokenID and one address can hold multiple of the same NFT. The question is whether or not to count all of the NFTs of the same contract/tokenID pair an address holds (Stacking) or just one (Not Stacking). A vote for not stacking would mean if an address has 2 jersey NFTs, only one would count towards boost. A simple majority on the Stacking vote will then decide which option is presented in the snapshot.

EXTENSIVE conversation has occurred in the discord here: Discord

stack 'em and looks good to me. keep it simple. good work team!

it shld nvr be stacked , the ownership of the NFT shld be decentralized.

excited to see badger NFTs get implemented towards boost. Thanks for putting together this proposal!

And after it launches in simple form, can look at a quadratic model, whereby it may be more profitable for any stackers to sell off duplicates rather than stack.

I’m in favor of stacking. Seems ridiculous not to allow it for the NFT’s worth 10 Badger in fear of centralization. These are just not large amounts.

Deciding on Not Stack when the in-forum vote was 31-30 seems unsound.

Integrate current Badger NFTs into Badger Boost based on the model described in BIP 73.

tl;dr: Each NFT will have a Badger value assigned to it with the total value assigned (for all current NFTs) equal to 100,000 BADGER. Whether NFTs in an address will stack or not, will be determined by the simultaneously run BIP 73(a): [insert link]

BIP 73(a): NFT Boost Stacking
Assume BIP 73(v2) [insert link] is approved, this vote is to determine whether NFTs in an address stack or not.

If you are in favor of all NFTs in an address receiving Badger boost, vote for Stack.

If you are in favor of only unique NFTs in an address receiving Badger boost, vote for Not Stack.

Should be able to stack, the increase is tiny really and the holders have been waiting long enough. It’s the least we can give them for this first version. If it becomes an issue, then we just remove it in V2.

10 to 1000 badger value per NFT? This is a joke.
It should be way way more, especially for the rare ones and the ones that show real support from the holder.

Like the 200 people who gave $2000 for an ugly jersey, those are your true supporters and you joke with them like that?

Or the ones that missed on $300k profit to hold digg and play your diamond hands game.

You really spit in the face of your true supporters with this one.

Its been under active discussion for months in the discord. and youre still free to share your opinions there if you would like to make your case and impact the vote.

I am for stacking, I would just be careful of stacking, badger jersey’s nft.
The badger value per nft, should be reconsidered, especially the badger jersey nft. I would suggest a higher number i.e 1K> x <50K badger per nft.

The per NFT Badger value is too low in my opinion. NFT holders have proven to be faithful Badger supporters and in some case contributors. They should be rewarded for seeing the value in Badger even when other’s didn’t.

I think the stacking argument is moot. If I can stack, I’ll stack. If I can’t, I’ll trade for the equivalent amount of badger the NFT is worth to boost with raw $BADGER.

If this is sane, then the only remaining argument is what the values for the NFT’s will end up being. I’m a fan of referendums because we can choose to change it later if our initial decision doesn’t pan out. As such, I’m okay going with the pilot to try it out.

If you’re considering making an investment in NFTs, it’s a good idea to familiarize yourself with the most significant drops that are planned to occur in the near future. This knowledge will ensure that you are primed and ready to purchase popular NFTs before all editions are sold out – giving you the opportunity to acquire a high-value asset before it is too late.

The above NFT calendar highlights the most significant drops and demonstrating how to purchase NFTs today – at a reasonable cost!