Scope: This will earmark the minimum amount of funds to consider in a restitution program to pay back non-recoverable funds lost in Dec 2nd, 2021 BadgerDAO Exploit.

BadgerDAO will implement the 5 components described below with the parameters chosen for each component as a restitution program to pay back non-recoverable funds lost in Dec 2nd, 2021 BadgerDAO Exploit (excluding DIGG). The components to consider are : 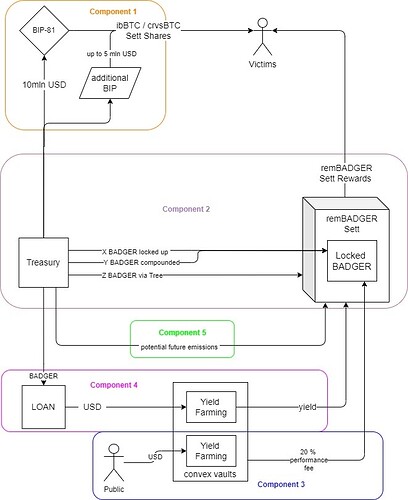 Note - DIGG - In this restitution consideration of unrecoverable funds also include all non-BTC funds that were stolen but not recovered (BIP-78) or repaid (BIP-79) yet, with the exception of DIGG. Those will be dealt with in a separate proposal. In case of unrecoverable DIGG LP positions, the non-DIGG half of the position would be treated as unrecoverable funds in this document at their respective value in BTC at the time of the hack.

After careful and extensive deliberation, a working group, consisting of

has under the guidance of and with consideration from Spadaboom and Po (BADGER) worked out and is now coming forward to the community with a proposal for restitution of the Dec 2, 2021 exploit.

This proposal shows how affected and managing parties can, in times of distress and utmost emergency, come together and negotiate restitution using the governance process of the DAO.

The proposal will be voted on as a whole, then for each component described, there may be a range of values for the token holders to vote on. The results will be scored with ranked choice voting and the final top value will be taken as the final result.

There will be a yes/no for approval to move forward with the governance process. If it passes there will be one ranked choice vote for component 2 to determine the amount of BADGER to include in the restitution plan. The restitution task force and the team as a whole will engage closely with the community over the duration of the BIP being live to monitor any manipulation of forum voting and ensure all parties agree that the vote result is legitimate. Any concerns of illegitimacy may result in adjustments to the BIP or moving approval to snapshot before proceeding with component 2 voting.

This BIP will be posted for the first 48 hours with no option for voting to make sure that it is digestible by the wider community and any adjustments can be made for clarity before opening up for voting.

Component 2 employs ranked choice voting in deciding the outcome of voting. You will be able to choose more than one option in order of your preference. If a choice receives a majority of the votes it will be automatically selected. If there is no majority the lowest voted option will be removed and have the votes redistributed to the voters most preferred choice remaining. This process is repeated until a majority choice is found. The choice that ends with the majority of votes after ranking the choices will be the final parameter used in implementing the restitution program. Note that you should select all options in your prefered order for your vote to receive maximal influence.

Please read the full concept and decide on the components in concert.

If you decide that the BadgerDAO should go forward with the restitution process, vote “YES” here and vote according to your preferences going forward.
If you would like to reject this proposal, vote “NO”. The Team will then reassess.

Should this proposal be accepted as written and honoring the outcome of the votes for each individual component above?

Use 100% of the funds from BIP 81 as initial restitution for non-recoverable funds (excluding DIGG)As part of this proposal we are suggesting to use 100% of the BTC acquired through purchases approved in BIP 81 as an immediate payment, given out pro rata to all exploit victims, in the form of bcrvibBTCsBTC sett tokens.

The DAO could allocate an amount to set aside to create a remBADGER Sett restitution, in three shares:

Shown is the amount of loss paid back in percent, assuming 120mln USD of loss. Green shows the point of full repayment. Please note that should the loss be repaid in full, the community may end the program early through an additional BIP. The historical mean price (daily) since BADGER inception is ~25 USD. The median price (daily) since BADGER inception is ~23 USD. This chart does not include distributions of value through components 1, 3, and 4 or any additional value earned through boost value of remBADGER.

BADGER in remBADGER will count both in boost and in governance.

State of the DAO

As of 12/15/21 the BadgerDAO holdings consist of 10.9m uncirculating Badger. For 2022 emissions are expected to use 1.8m -2m BADGER and ~600k BADGER to pay the team and ~350k BADGER owed to Gitcoin. Excluding the one time payment to Gitcoin this means at the current rate of pay and emissions there are ~4 years of runway. Emissions are scheduled to reduce over time which will extend this runway. The DAO revenue for 2021 was ~$24m (~1.5m BADGER at $15). With the change to ibBTC strategy and reduction of fees the income for 2022 is expected to be $6m.

How much BADGER should be allocated to the program described above?

There will be 7 different options available for vote with 7 different total BADGER amounts (500k → 2m) for the entire program distributed over 3 different durations (12, 18, 24 months). These will be the options presented in the ranked choice snapshot described above.

Badger aims to deploy convex vaults (forks of current vaults) for high yielding stablecoins (MIM, FRAX, etc). Anyone will be able to deposit into these vaults. A 20% performance fee could be used to buy BADGER which will be deposited into remBADGER (increasing its ppfs). For users affected by the exploit these will be effectively 0-fee vaults that will go towards compensation.

For unaffected badger users they will get the same benefits as the BTC denominated vaults (auto claiming and staking) while being able to consolidate their farming. An added benefit will be the additional bveCVX being locked and distributed, as well as the positive buy pressure for Badger. A separate BIP will be put forward to the DAO for a vote in Q1 / 2022.

An additional yield source that could be added to restitution would be to consider borrowing stablecoins against uncirculating BADGER tokens, with favourable terms (manual liquidation and reasonable heads-up to reduce risks forced selling the bottom) and use them to farm yield (possibly dogfooding component 3 if it is built).

In the initial release of this program the net revenues will be allocated to the remBADGER Sett emissions via the Tree. This would be defined in a BIP scheduled for Q1 2022 if this component is accepted. Any deployment of a program like the one described above would go through a full governance process for approval before implementation.

A task force including members of the team and community (see below) will monitor the health of the restitution program. If they find the program to be producing insufficient restitution to victims, they may propose extraordinary sources for yield, including new or existing BadgerDAO products. Any new programs will go through the full governance process.

A bounty of $50,000 USD in Badger is available for qualified members of the community to work with the team to implement Components 3 and 4. Up to 2 badger-weeks of technical time are allocated for each component in the first quarter of 2022 to complete this work.

Create a task force that includes : @2weiX @JohnnyF @sg @TheRealWeapon @$1500Badger @Tritium that meets quarterly to discuss the health of the restitution plan indefinitely or until an amount in USD or BTC at the time of the hack is paid back in full (see below). This includes any coordination with the team in building additional products to support the restitution plan (see Components 3, 4, 5).

After the initial amount of dedicated BADGER has been dispersed, and then after every year, this program would be reevaluated for how successful it has been. The main metric of success will be how much value has been returned to exploited Badgers measured in USD and BTC at current market prices and this will be used in comparison to the amount of assets lost on Dec 2nd, 2021 as measured in USD and BTC based on pricing at the block before the first exploit transaction[block/timestamp].

Just a note about this table: while there is shown values of more than100%, there will never be a payback of more than 100%; if full restitution is achieved at any point in time, there will be immediately a new BIP up to stop all future payments at that point.

So there’s no risk that the victims are being compensated more than they lost.

Couple issues here we need to discuss before any official snapshot is taken:
—Can we get some clarification on if remBadger will be “tradeable” or not? Based on discussion in the Discord, this is important for the overall(unaffected) community to understand before voting on an overall amount to be allocated, especially since 100% of the community may be eligible to participate in this unique victim’s vault. Also, this re-routing of vault funds, without withdrawing, does not benefit its intended cohort—the victims themselves. This needs to be more thoroughly explained and discussed. See this Discord post: Discord

Important point for everyone to understand. There will never be >100% compensation so 33%(3 of the nine boxes) of the 2 million Badger allocation will never occur in reality.

RemBADGER will be an ERC-20 token so it will be transferrable. The DAO does not currently have any plans to setup liquidity somewhere, but a third party could do so.

Just a reminder that there is a $120million incentive for the victims to buy up $badger and vote for the most lucrative repayment plan independent of what’s best for the DAO.

The two are entirely interrelated based on the plans put forth here. The victims need the DAO to continue running and developing new strategies; this is why 2 years of spread out compensation is offered in the ranked choice. Restitution to the victims will mainly depend on an increase in Badger token price, so it’s in absolutely no one’s interest to see it go down. Also, if remBadger is made transferrable(seems likely), then anyone can enter the victim’s vault and participate in its gains.