There is already a heavily incentivized locked CVX vault (bveCVX) which has attracted >$6m in deposits. To ramp up these efforts Badger is proposing a number of incentives, initiatives, and adjustments to continue building this balance and securing Badgers place as a major player in the CVX game going forward. This proposal is focused on those that have already locked their CVX and are not able currently to deposit into the badger locked CVX vault (bveCVX). These users currently have their CVX locked for another 10-16 weeks but can still choose to delegate to, or vote in line with, Badger.

There is already significant amount of CVX locked and cant immediately be deposited into bveCVX. To get these CVX to vote aligned with Badger in the interim we will be participating in bribing through votium. 20k BADGER has been approved by the council to start. We will be using those initial votes to learn and put together a more comprehensive strategy to bring to the community. Thinking long term, it would be ideal to convert delegators (and those that vote badger aligned) into bveCRV depositors when their tokens unlock between 12/24/21 and 1/21/22. This BIP is asking for approval for a one time migration incentive given to those that vote aligned with Badger now and migrate their CVX into the bveCVX vault later. We are looking for faster than normal governance approval so that potential participants can be informed and act before the next vote (10/14/21).

All locked CVX holders that delegate to badger or for any pool that backs a badger vault will accrue .0015 BADGER per CVX voted per vote. You delegate 1,000 CVX for 3 votes and then deposit 1,000 CVX to bveCVX when it unlocks you accrue 4.5 BADGER. The Badger will be distributed on or before 3/1/21. The .0015 number was chosen based on current price ratios and to match roughly the 10% fixed APY on the bveCVX Sett, bringing delegators closer to parity with vault depositors as long as they ultimately deposit.

The amount anyone can accrue per vote is capped by the amount they deposit in the vault. So a user that delegates 10,000 for one vote and only deposits 5,000 CVX will only receive 7.5 BADGER for that vote, vs 15 if they had deposited 10,000. There are 6 votes left between now and when the first CVX lockers see their funds begin to unlock, which leads to the below potential payouts. It is impossible to know exactly the impact but if there were 5million CVX voting with BADGER over the next couple months the base yield for Badger setts would dramatically improve. This ratio also, as far as BADGER incentives are concerned, brings delegators roughly in line with bveCVX. 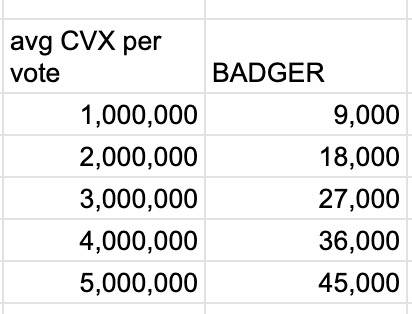 These delegators and voters will still be earning Badger bribes through votium and all other asset flows associated with that (as will depositors to bveCVX). bveCVX will be receiving an additional 10k cvxCRV a week as described in BIP 69, remaining a very attractive option for gaining CVX locking rewards. We will be working to show this bonus accruing in the UI for these users and after the program has completed will distribute the BADGER as quickly as possible through the Badge Tree.

Can I lock my CVX now and participate? No, please deposit to the bveCVX vault, you will earn all of the same rewards + additional cvxCRV

Can I vote with different CVX amounts than what I deposit? Yes, but the smaller of each vote or the final deposit amount will be used to calculate the bonus distribution

Full support on this. It is on the best interest of the DAO (and all stakeholders).