The performance of each treasury asset and the treasury as a whole must have clear accountability to allow future governance by BADGER token holders. The following is research by $1500Badger on Treasury Divestment of CVX

TLDR; The Badger Treasury should divest 77k + 19k of the bveCVX in Treasury for stablecoins to extend runway and remove the Badger/WBTC liquidity on Convex.

BadgerDAO has had great success building products in the Convex/Curve ecosystems. Specifically, the bveCVX product has been successful and uses the Badger/WBTC Convex gauge as a means for profit taking. These profits are received in the form of bveCVX and bcvxCRV meaning they are autocompounded. The cvxCRV has been used in the past to purchase AURA which was a successful investment for the treasury. The bveCVX has been left to compound and during that time it continues to vote for the Badger/WBTC gauge on Convex.

Currently, 5% of the bveCVX voting power is used to vote for the Badger/WBTC pool (about 84000 tokens). In comparison the treasury holds 77000 bveCVX which votes entirely for the Badger/WBTC pool. The Treasury also controls $386,000 of the liquidity in the pool. This means if the treasury were to pull its liquidity and stop voting there would be about $1.6m left in the pool earning ~9% vAPR. This means the treasury bveCVX is earning the treasury about 7% APR on $386k which is annually around $27,000. The bveCVX is valued at around $300k meaning a price decline of 30% would result in a $90,000 loss. One must have a positive outlook on the CVX price in 2023 to expect a positive return on the investment.

Note also that this could result in a loss of liquidity in the Badger/WBTC pool. To return to the 16% APR about 20-30% of the remaining $1.6m liquidity could leave the pool. When added with the $386k removed by the treasury this could be nearly $800k reduction in Badger/WBTC on chain liquidity.

It should also be noted that bribing on BADGER/FRAXBP is currently much more efficient for the treasury than holding bveCVX and voting with it. The bribing strategy allows the treasury to avoid the market risk associated with holding bveCVX. With the APR so high this is also an obvious place for the liquidity in the BADGER/WBTC pool to migrate.

Even during the past 6 months with reduced volatility the trading range on CVX is over 100%. This means a 30% drawdown in a 6 month period is highly likely. In order for the APR to remain positive in 2023 CVX must not fall lower than $2.70. This could be used as a stop loss for the position to preserve the USD value in ultra-bearish market conditions. Due to the large price swings it also appears historically favorable to average out of the position which would result in much higher USD returns than the expected yields.

Here is the bveCVX unlocking schedule for the following weeks. The nearest and largest opportunities to unlock are the 15th of Dec 2022 and the 5th of Jan 2023. If the treasury was able to capture 60% of this available unlock then in 28 days the entire 77k CVX can be withdrawn from bveCVX and able to be sold.

It’s important to note that at the time of writing this document the 12/15 unlocking is only two days away. This means this treasury decision must be in place and executed in the next 36 hours to take advantage of this particular opportunity. Missing this unlocking would push out the expected time of divestment another 14 days for a total of 32 days expected time to divest.

It is also possible to withdraw tokens as new CVX is locked. However, this number is unpredictable but an automated process could be put in place to withdraw X% of all new deposits until the treasury is fully divested. This is unlikely to significantly expedite divestment unless a large depositor comes in which is again unpredictable. 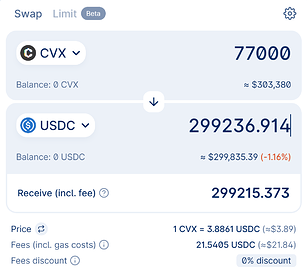 Looking at the volume on chain for uniswap and sushi swap and considering the slippage suggested by cowswap, selling the CVX itself should not be too hard. At around $30k daily volume the CVX could be sold in 10 chunks over 10 days and reduce the slippage even further, estimated around -0.58%. This could be done using 10 market orders on cowswap.

There is a surprising amount of daily volume in the bveCVX/CVX pool, however due to recent bear market conditions the pool has become heavier weighted bveCVX and the slippage on 77k bveCVX to CVX swap is around 6% which is much too big a loss to tolerate. It would be only possible to swap around 700 CVX a day to bring slippage down to a more tolerable level but this would take 100 days to divest the entire position in this manner. 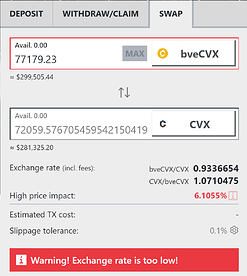 Again due to high slippage and the current imbalance in the pool using bveCVX to expedite divestment is not recommended at this time. While it can be used it would have little impact on speeding up the process and add more complexity to execution.

There are 600k Convex tokens deposited in AAVE lending markets, however because of a recent threat these markets have been temporarily frozen. I will still talk about how this market could be used to expedite divestment were it active.

The treasury could deposit $1m USDC into AAVE and borrow 77k CVX to then market sell to stablecoins. This would be recommended in a situation where the treasury is expecting the price of CVX to decline over the period in which it waits for bveCVX unlocks. Because the LTV requirement on CVX is 35% the Treasury may also need to deposit up to $1m in additional value in ETH and BTC to protect the loan. The idea would be the loan should be repaid within 28 days based on the unlocked liquidity which would become available to pay back the loan.

Were the lending market currently available it could be used as a stop loss tool for selling the CVX if it falls below $2.70 or if the treasury became bearish on the CVX value due to an outside event.

This can also be used as a 0 premium call option on CVX. If the treasury decided it wanted to sell half of the CVX after the price moved 25% up within 1 week the lending market could be used in a similar way to lock in those gains while waiting for the CVX in the bveCVX vault to become available. 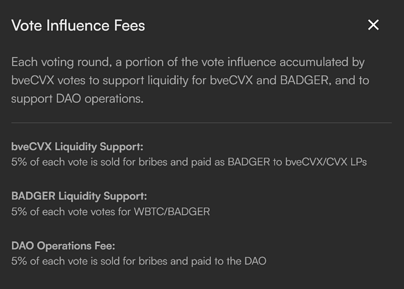 Another consideration is the product itself. If the treasury is going to withdraw its Badger/WBTC from the pool then moving the 5% fee intended to support BADGER Liquidity to a new task may be necessary. One possibility is to have it vote for the Badger/FRAXBP pool or another is to just have it hunt bribes just as the DAO Operational fee does. Bribe hunting is likely the best option as the FRAXBP is already receiving over 100% APR. This means that taking a 10% fee on bribes will likely be the best return to the treasury. This would also allow the DAO to discontinue the Badger/WBTC vault.

How long will the investment thesis take to play out?

It may take several weeks to mechanically execute this divestment.

Will the treasury recoup funds or does the investment represent an outlay?

Yes, this is a divestment back into stablecoins intended to increase the Treasury stablecoin runway by ~10%.

What are the risks associated with each investment?

4 - Convex and Curve protocol risk, both are well defined and audited but there always remains a possibility of contracts being exploited. There are no known vulnerabilities at present.

Liquidity risk refers to how easily an asset can be bought or sold in the market.

5 - Due to unlocking schedules and low on chain liquidity

5 - CVX is a low liquidity asset that has high volatility.

The risk of loss from the failure of a counterparty to make a promised payment, this should cover airdrops expected

2 - It is unlikely that Convex and Curve will not pay out promised returns, however the ecosystem can have less volume and therefore less fees to pay as returns. The CVX emissions are also diminishing rapidly.

How long will it take to execute, how many signers on a Multisig or queue of things that must be signed first.

4 - Because of unlocking and low liquidity executing this divestment can require many steps and multisig actions.

This is a one time divestment and so will end when all swapping has been completed. 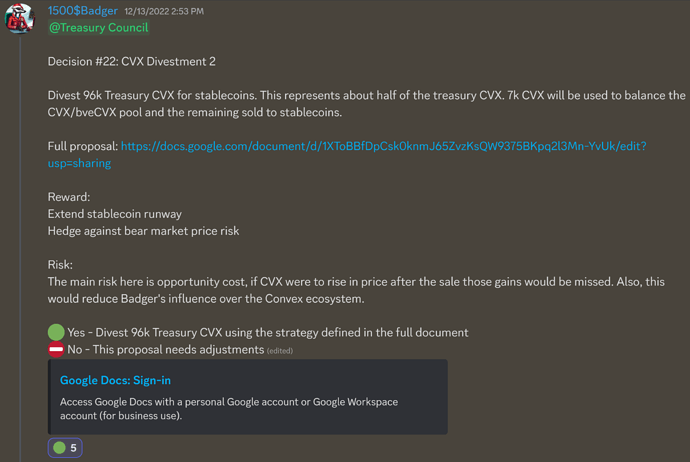