Scope: Badger and DIGG Sett Emissions for the 13 week period between September 30 - December 30.

The current idea with Badger emissions is to distribute them indefinitely to the DAO participants who help to bring Bitcoin into DeFi.
To distribute a fixed supply of tokens indefinitely, the rate of supply spending needs to be decreasing with time. In general, the lower the “starting point” is, the more gradual the emissions reduction rate can be.

The Q4 emissions schedule has the suggested average yearly rate of Badger supply spending in the 8.4% - 10.5% range. For comparison, the current schedule has it at 11.5%. The plan is to have a more extensive discussion with the community around the longer-term (year+) emissions schedule once Badger tokenomics shapes out a bit more in Q4.

This is a particularly important schedule because it coincides with the launch of the locked convex vault which will establish Badgers vote weight in the Convex+Curve ecosystem. With BIP 68 establishing a mutually beneficial arrangement between ibBTC and direct vault depositors, it is more important than ever to have a solid base of vaults with consistent long term yield to support the growth we are all looking for. Apart from the high level strategy and classification adjustments, we believe this schedule provides a framework for successfully securing long term baseline yields for Badger Setts.

Here’s the sheet and the suggested schedule: 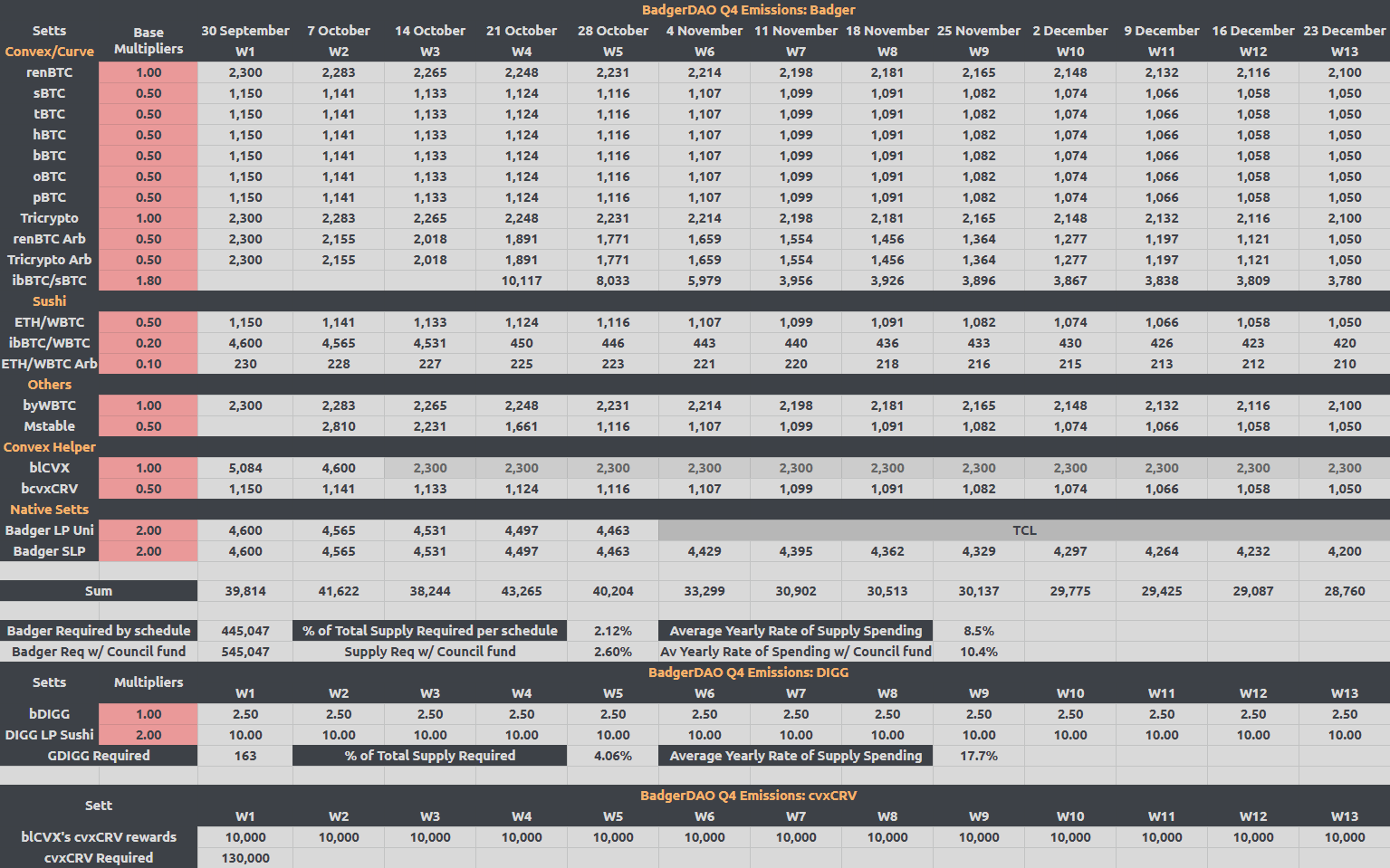 The BIP process takes a lot of time and attention, and with Badger going cross-chain more actively in Q4 it seems that having a more flexible structure would be more suitable.

So the suggestion is to reserve 100,000 Badger to add new Setts to the schedule with Badger Council approval without needing a BIP.

The changes to the Setts in the current schedule would still require a BIP, though, so the Council wouldn’t remove the rewards from a Sett.

Approve up to 100,000 Badger to be spent on adding new Setts to the schedule with Badger Council approval.

Without a change to the native Setts emissions, they would consume between 24%-28% of the schedule. With the proposed change, it would be about 15-18%, and would be lower than that for the next schedule.

With the Badger Boost Power-UP implementation, depositing Bitcoin into one of the non-native Setts has become the best option to earn Badger on your Badger and DIGG, which from my perspective is much more aligned with the DAO’s mission.

In its current state bBadger is just distributing Badger rewards to a % of Badger holders who are staked, and for the majority of holders and Sett users it doesn’t make sense to use it, as the gas costs of staking and unstaking would outweigh the benefits of being there. There has always been the idea that a strategy would emerge behind bBadger that would add utility, but if that happens it is still a ways away and a new vault asset can always be deployed if needed. bBadger in its current state is more of a distraction and does not bring utility, so it makes sense to stop paying for it and direct those emissions wher they can be of the most use.

Badger tokenomics being focused on Badger instead of bBadger seems like a better way to go, considering a wide range of current and future Badger token holders. Badger is better as collateral, and a better asset to go cross-chain with. The proposal is to cut bBadger rewards, which would allow the schedule to save ~0.5% in the yearly supply spending rate.

Incentivizing native token liquidity with emissions is a less sustainable and scalable approach to have deep liquidity for the token than maintaining Treasury Controlled Liquidity (TCL). On top of that, TCL-related mechanics serve multiple purposes for the BADGER token and the DAO. It is our goal to have a proposal for TCL that will provide equal or deeper reliable liquidity for BADGER, owned by the treasury, in the next 4 weeks.

To account for this the plan for Q4 is to halt Badger rewards for the Uni V2 pool after a responsible buffer period once TCL is implemented, which would save another 0.7% of in yearly supply spending rate if the change is implemented before October 28.

With the new schedule, BadgerDAO will launch Badger Locked CVX Sett, blCVX.
Securing a large vote weight in the Convex ecosystem is of paramount importance to the long term success of Badger. With CRV and CVX emissions being some of the largest and most reliable distributions of long term value available and controllable through economic means Badger needs to capture as much vote weight as possible as early as possible to ensure good baseline yields into the future.

BIP 67 has already approved 2542 and 2300 Badger for the first two locking weeks, and the targeted 10% Badger APR after.

The BIP 69 suggestion is to double the rewards for the first two weeks after the Sett is launched for the general public to 5084 and 4600 Badger. The Badger rewards on the Sett would be distributed via the Badger Boost mechanic.

On top of that, the suggestion is to distribute 10,000 of cvxCRV per week to the Sett for the duration of the schedule. The funds would come from the performance fees accumulated by the DAO in the previous quarter (a total of about ~155k CRV).
This would boost the underlying yield on blCVX and push Badger towards being the best place to put your CVX to work even if only counting non-badger rewards. If the vault can attract a large amount of capital, then the DAO will be able to vote to retain higher yields on all Curve BTC denominated pools.

bcvxCRV Sett allows the DAO to distribute staked cvxCRV tokens to Sett depositors, it allows the DAO to accumulate more Convex ecosystem tokens, it supports the cvxCRV peg, and it has been one of the more cost-efficient Setts overall.

Also, blCVX rewards will be distributed in bcvxCRV, so the increased bcvxCRV rewards would make the Sett a more attractive option overall. The suggestion is to increase the base multiplier from 0.2x to 0.5x, which would mean a 2.5x increase on the first week of the new schedule compared to the last week of the current one.

With blCVX launch, it seems that focusing all CVX-related rewards on it would be a better strategy to attract more CVX voting power.

So once blCVX Sett goes live, the suggestion is to drop Badger rewards on bCVX, and stop counting bCVX deposts as the non-native balance in the Badger Boost calculation. It would still serve its purpose as the helper token when it comes to Bitcoin Setts rewards.

If blCVX open launch happens later than Thurdsay, the suggestion is to keep the bCVX rewards on the 12th week level before blCVX launches.

Discontinue bCVX Badger rewards once blCVX is launched, and stop counting it as non-native balance in the Badger Boost calculation

On the current Convex Bitcoin Setts, no change is suggested, besides the small overall reduction at the rate of 0.76%/week.
The DAO has also launched two Curve Setts on Arbitrum. The suggested schedule scales from the current level of rewards at 1x multiplier to 0.5x multiplier by the end of the schedule.

Keep the rewards on Convex BTC Setts on a similar level with slight reduction, add the new Curve Setts on Arbitrum with 1x → 0.5x gradual reduction rate over the 13 week duration

WBTC/ETH and ibBTC/WBTC Sushi Setts have underperformed during Q3 cost-efficiency-wise for the DAO, mainly due to the lower underlying token rewards on the pools. So the suggestion is to halve the WBTC/ETH Sett multiplier from 1x to 0.5x.
And for ibBTC/WBTC Sett the proposal is to migrate 90% of the rewards to the new ibBTC/sBTC Sett on Convex once it becomes available.

The DAO has also launched a WBTC/ETH Sushi Sett on Arbitrum, but the underlying rewards are low on it as well, at least for the time being, so for the new schedule, the proposal is to keep the rewards at the same level they are currently, which would translate into 0.10x multiplier.

Curve pool structure does a much better job for trading stable assets than the Uni V2 structure does, plus the DAO will be able to vote on the underlying token rewards on the pool with the tokens locked in the blCVX Sett.

On top of that, there is a suggestion to do the Launch Boost structure of 2.5x - 2x - 1.5x rewards for the ibBTC Sett. The current voting strategy with blCVX Sett’s locked convex tokens is to vote according to the % of the Curve pool that’s captured in the BadgerDAO’s Setts, so it’s important to get that % as high as possible for the ibBTC pool on Curve.

The DAO plans to launch a new BTC Sett in collaboration with mStable with a DAO to DAO MTA loan that would increase the underlying yield on the vault.
The suggestion for the Sett is to add it at 0.5x multiplier, same as the majority of Convex BTC pools, and implement a 2.5x - 2x - 1.5x Launch Boost structure on top of it.

For DIGG emissions, the suggested schedule has them at the rate of the last week of the current schedule. It would require 4.06% of DIGG supply, and it should be covered by the funds available in the treasury.
The current state of DIGG liquidity is healthy: it has ~18 M of liquidity with a fully diluted market cap of 23 $M, and it seems that having a large % of the supply locked in an LP should be a positive for DIGG keeping its peg.
During Q4, though, it would be good if DIGG community would reach a consensus around the longer-term emissions plan for the token. As 20% of the token supply got reserved for the TCL via BIP 66, the treasury would be running out of available supply for the next schedule at the current rates. Even though pulling the funds out of TCL would be an option, I find it a suboptimal approach. So instead I would explore the idea of keeping all of the TCL in DIGG/WBTC LP, and doing a minting event with a long-term emissions structure plan during Q4.

Keep DIGG emissions at the current rate for the Q4 schedule

The rff in the Discord channel has been live for about 5 days, and it doesn’t seem that there are strong contentious points with the BIP. The plan is to move to snapshot after 24 hours since the BIP is posted, and then have the usual 48 hour snapshot vote period to allow the new schedule to get implemented on September 30th.

I do believe in more flexible structure which is why I still think that emission rates should not be fixed for the whole quarter, but based on a model that, according to certain key underlying variables, could optimize allocations. A fixed emission schedule might often lead to suboptimal allocations (especially in an expansion phase with more Setts across more chains).

Plus the added benefit that governance would only be required if there needs to be a significant change on the parameters of the model.

By the way when a Sett has increased emissions for two weeks after launch, that should be very clear in the UI because most depositors don’t really know the emission schedule and they will see a sudden drop, important, in their rewards.